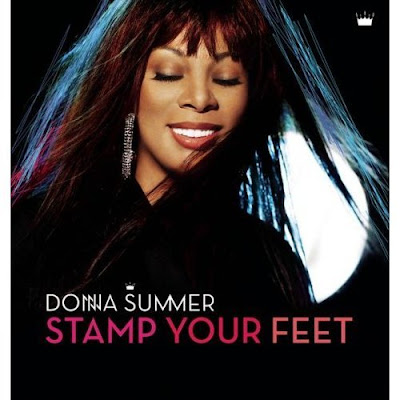 Donna Summer's new single Stamp Your Feet is a phenomenal power-to-the-people anthem. Surely one the pop songs of the year. It was written by Greg "Wow" Kurstin, Donna and Danielle Brisboise, the former Gregg Alexander protege who grew up on American TV playing Archie Bunker's granddaughter.

Stamp apparently began its life as The Player's Anthem and you can imagine it being used for the Olympics or World Cup. There's an extended competition metaphor in the second verse. El MarvelOso asked the same question I have: Does the chorus really feature the line "Make a big-ass sound"? The middle eight (at 2:25) is a wee bit embarassing with Donna squealing "You got game!" but the song is so infectious it overrides that moment.

I have numerous Donna stories going back to like... 5th grade? I'll spare you them. For now. In the meantime, her first album in 17 years, Crayons, is out May 20 and you can get the teaser track, I'm A Fire, on iTunes US. The Solitaire Club Mix is recommended. Also, be sure to read John's PopDose piece on Bad Girls.

My Top Ten Plus One Donna Summer Songs Are...

Donna is on tour this summer. Too bad the HRC was not able to draft her for their True Colors Tour. She would have been the perfect closing act.
Posted by xolondon

I agree with most of your choices but I'd definitely have to have This Time I Know It's For Real in my Top Ten. Possibly Whatever Your Heart Desires too; I just love the Another Place And Time album. I'm looking forward to the new material; hope it doesn't disappoint.

It's a Donna revival up in heyah!

So you were in 5th grade in the early '70s, when Donna was doing Jesus Christ Superstar, luv?

And how dare you not include "This Time I Know It's For Real" or "I Don't Wanna Get Hurt" off 1989's Another Place And Time! Well, maybe a bit after your time, perhaps.

Yes, beeyotch, I am older than the Hills Of Time. I rollerskated to Donna's Bad Girls album, though I was quite a young rollerskater. I will explain that in my album review.

I bet kids don't even know what the hokey pokey is these days. And it is not a sex act!

PS: I do like This Time I Know, but as YOU know, I did not really get into the SAW stuff. I was in college then and TRYING to wear vinatge clothes and be a baby Michael Stipe (when he was not bald).

I hope there are some real songs, like on her bad girls cd. I really liked Sunset People.

SAW?? Could somebody translate what that means?

Yes, I remember your vintage period. And mine which was perhaps no less advisable.

You have some good ones on there. I remember "On the Radio" from way back on WLEV 96. And "Heaven Knows" is also one of my favs.

I agree with you on the HRC; it would've been perfect.

Phx's Pride was this weekend and I didn't go. I've only gone once in say 8 years. I know it's early, but if you consider what Phx is like in June, you'll figure out why it's in April.

Love's About To Change My Heart was my favorite off of the SAW-produced album.

Babs used to come to my apt back in like 1991. My first apartment.

I had a feeling it was a ref. I'd get if I was more of the music person, or the right kind of person.

Yes, I did come to the first apt. and it feels like ages ago and not simultaneously.

Is this how it is to cope with aging? Sigh.

Wow, thanks for the link to the Popdose piece. The version of "Sunset People" in that video is SO DAMN HOT. It's like they turned everything up to 11! Amazing.

Nothing from Four Seasons Of Love, eh? Always one of my faves...

I don't know any of those songs. Michael, you'd better give us a Top 10 for Donna!

Love Donna. Love your list, but how could anyone go wrong with her catalog?! Okay, there have been a few mistakes (or rather, Mistaken Identities) out there...