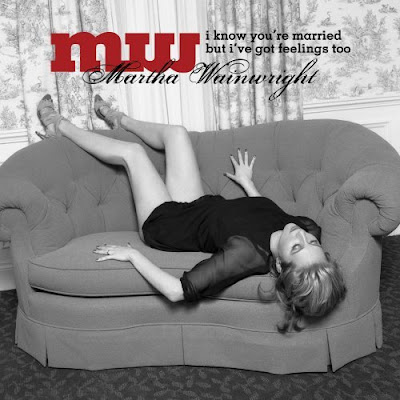 I love Martha and her album cover seemed familiar, so I dug around and realized it's an homage to André Kertész's photograph of a dancer on a couch. It's called Satiric Dancer and was taken in Paris in 1926, totally impromptu. As for Martha, her album has a great title, though the single, You Cheated Me, sounds more like an album track to me. 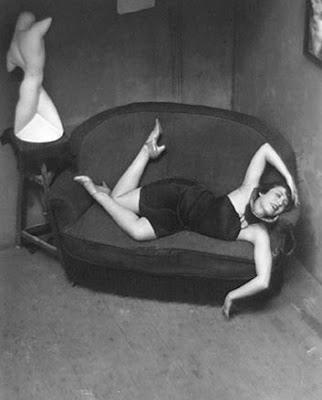 I wasn't mega sure about the single at first but it has grown on me hugely and I love it now. She will struggle to match the brilliance of the debut album but we can hope.

She's still doing music then? That's cute. Good for her.

Have you ever heard one of her songs, Mr. Positivity? ;)

the return of Martha in 2009 is a moment i am waiting for, what a great album cover!

Splutter! Gasp! I was making a very positive comment -- good for her for making her music!

And of course I know her music... she warbles along on that one Snow Patrol song about a sink or a bar or a fire or some shit.

I LOVE the album cover and title, and I want to love her considering the great stuff she's done on her brother's records (in particular that A-MAZ-ING cover of "Stormy Weather"). I'll check out the album and see if she can win me over.

"Martha Wainwright returns with her eagerly anticipated second studio album "I Know You're Married But I've Got Feelings Too". A glorious follow up to her critically acclaimed self-titled 2005 debut.

Featuring twelve original tracks and a touching cover of the Pink Floyd classic "See Emily Play", this album is a huge a step forward both sonically and lyrically from her debut. Produced by a range of producers including Brad Albetta, Martin Terefe, and Tore Johansson, the album walks the line perfectly between subtle beauty and raw emotion.

"The title sums up my dark humour. Plus it's an homage to a few good men and women that I've loved at one time or another. After all, these people never go away. You end up loving them for life" she says.

From the intricacy and simplicity of "Comin' Tonight", to the plaintive power of "Hearts Club Band" the album is full of standout tracks. Other highlights include the album opener "Bleeding All Over You", and the track "I Wish I Were" which showcases Martha's majestic and evocative voice perfectly.

"I Know You're Married But I've Got Feelings Too" is packed with contributors including Pete Townshend ("You Cheated Me"), The Band's Garth Hudson ("I Wish I Were"), and Steely Dan's Donald Fagen ("So Many Friends"). It also features members of Martha's extraordinarily talented family including brother Rufus ("In The Middle Of The Night"), mother Kate McGarrigle, aunt Anna McGarrigle, and first cousin Lily Lanken ("See Emily Play")."