Why don't we make a little room in my BMW? 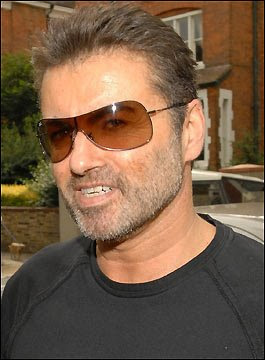 There really was a point in time at which George Michael could do no wrong. What makes his career so notable, in my opinion, are the stylistic leaps he took with each record. You wouldn't know how great a vocalist he is from the first Wham record, but that became clear on Make It Big, where the songcraft took a leap into classic, not throwaway, pop. His first solo album, Faith, fulfilled that promise and made him into a massive star, one who could really sing. Then Listen Without Prejudice, Vol. 1 - at this point, it would be a cliche to ask "Where is Vol. 2?" - launched him into that place where pop music meets art, a la Madonna's Like A Prayer. That album is absolutely perfect and it added a level of introspection and emotion that he'd never displayed before.

Since that time, well, we know what happened. Tearoom trolling, extended pot haze, an almost hermit-like persona. I mean, the man sojourns in Dallas! Not quite Lauryn Hill weirdness, but a waste of talent with just occasional glimmers of past genius in newer recordings. In many ways, he seems far older than his 44 years. The empathetic part of me thinks that George is insecure and never really felt he deserved the success he had, so he did everything he could, including lawsuits, to sabotage it. There is a part of him that seems quite normal and unpolished in interviews.

The last time he toured America was in 1991 for the Cover To Cover tour, which I saw. The show was a celebration of songs he loved: perfectly chosen covers, some obvious (Elton's Sun) and others less obvious (Seal's Killer). I love that George respects other people's music. He is a true music fan and he has impeccable taste in music. 17 years later, George is finally returning to America and... I am so there. All is forgiven and forgotten. He just gave an interview to USA Today where he had this moment of introspection:

'I still have facial hair,' he says. 'My hair is much shorter and browner. And I don't dye it.'


Well, bully for you, Jorge Miguel (as we like to call him). Probably not a factual quote, based on the photo above. I just hope you take the time to meet your opening act on this tour, a measure of respect you did not accord Sophie Ellis Bextor.

Worldwide trolls please note that the new US version of Twenty Five, the hits CD, contains a new recording, a cover of Nina Simone's Feeling Good. I'll do a follow-up post on my favorite songs by George.

Nice comparison: Listen Without Prejudice & Like A Prayer. I totally get what you mean.

So ironic as I just mentioned the other day that I had seen 25 was being released in the US, and after his appearances on Eli Stone (best thing about the show), wouldn't it be great for him to stage a comeback here? I then picked up the 25 import DVD (40! Videos, I might add--missing only Young Guns, Bad Boys, & Wham Rap to my knowledge), and what an amazing pop career the guy has had. Even the lows were better than most people's highs, and he definitely sits as one of the top male vocalists of the past generation.

Now I am completely chuffed about a tour! It has been quite a long time, and, tabloid dramas aside, I think he has a good shot at reminding America why they loved him so much to begin with. Let the music stand up and the voice be heard.

Can't wait for your extended post XO! Now where is that new GM album? Something a bit less snoozy than Patience this time? (Although Freeek! and Shoot the Dog were great pre-album singles).

Good post! Being a lifelong admirer of George's music, I must say I agree with you. On the other hand I'd love to see him do something more with his vocal abilities (think Jeff Buckley). He's such an amazing singer, but IMO he likes to play it a little too safe.

Anyway, the European live shows were fantastic (seen two), so all fans in America, enjoy!

When I was 16, I'd go over to the house of this 14-year-old girl I was friends with, and we'd play "Freedom '90," "Groove Is In The Heart" and "Suicide Blonde" by INXS to death in her room. I think she thought there was going to be romance -- if only she was a bit more intuitive about the music selections.

I love George Michael. He's got a few duds in his catalog, but the bulk of his work just shines. I'll have to try and make it to the Las Vegas show.

I like Wham (I am an 80s pop freak) but his solo stuff just bores me. Maybe it's also beacuse of his horrible sleaziness but I find him really creepy!

i too worshipped wham (it was the gay boy inside me) and religiously devoured his first two solo sets. I even partially enjoyed songs like Amazing and Outside. But much like many of my 80s/90s musical icons (Whitney, Mariah, Janet) his flame flickered and died. Which is ironic in a way. PS was i the only person in the world to be shocked when he came out? Mind you i will probably be a little surprised when Clay Aiken emerges triumphant from the closet (oops that might have been for dluvs blog!)

As much as I think George has not kept his fans always at the front of his thoughts, I am far from putting him in the dying flame category. Comparing him to Whitney, Mariah, Janet, etc. is not really fair, as George not only writes most of his material, but plays/produces a great deal of it as well.

Much of his 80s stuff was great--Different Corner, I'm Your Man, Father Figure, Careless Whisper, Faith--all classics. Listen Without Prejudice is somber, but what a beautiful album (Something to Save--wow). Older was a bit snoozy, but considering many in his life had died, that was to be expected (although Fastlove was great).

He really can sabotage his own career when he wants to, and some may find him creepy, but he has a good sense of humor, and is usually very well spoken and self-effacing in interviews, which is endearing. Could a comeback be around the corner? Stranger things...

Countpopula - i wasn't comparing him to Janet, Whitney and Mariah - i was just saying that FOR ME those were the singers i worshipped in the 80s and 90s who don't really do anything for me anymore. So it's a personal thing not a general comparison :) I'd be happy for any of them to wow me with a great collection of songs and totally live in hope....