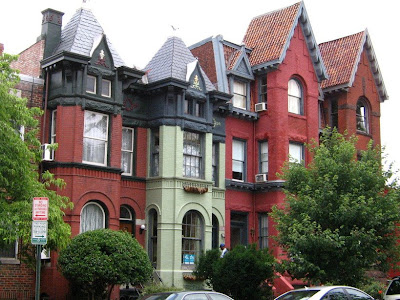 Moving on the weekend. Gahhhh! My new neighborhood was named one of the Top 10 Neighborhoods in America last October. That's good, right? I will say that it is very friendly - I have already met many of my new neighbors, who've been quite helpful. None of those above are my place (I wish!), but it is the neighborhood, which is street after street of amazing old houses each in a different color, including a bright green/yellow house and a hot pink one.

That Madonna album cover: I will not speak of it.

The new Death Cab single is 8 minutes long with no vocal until almost minute 5. If it were musically exhilirating, this might make sense. But it's not. You could find it here, last I checked.

The Kooks album, Konk, is not very adventurous, though the single has grown on me. They are releasing a version that has extra songs. It's called (not so cleverly) RAK, after the studio it was recorded in.

Famous "GILF" Marianne Faithfull is now getting paid to jerk men off through a hole in Broadway wall. Sort of. Read more at New York Magazine.

The REM album, like The Kooks, is not the big return I had hoped for. Not a surprise. Bring back Bill Berry and get some mandolins and a string quartet, guys. And some melodies too. In two year's time, they'll probably be verbally trashing this record like they do with all their others. Read an interview with Michael at Pitchfork.

I love how Coldplay said "It's not about Ricky Martin" after they announced their CD is called Viva La Vida.

I recommend the Guillemots single (Torr hates it!) called Get Over It. It's catchy and mindless fun. The lead singer's name is, I kid you not, Frye Dangerfield.

I kind of wish Hillary Clinton would shut up. She is so transparently craven in her desire to win that it lessens my trust in her.

Retro Wonderland has classic songs from 'Til Tuesday and Thompson Twins.

Speaking of which, I am still looking for the Alex Sadkin UK version of Thompson Twins' Lay Your Hands On Me. For some reason that song, in its American mix, has been on repeat on my iPod lately.

I took Lorraine off my facebook. They do have an album coming out, but who knows where and who knows when. Which reminds me, did Dangerous Muse get dropped? Apparently not, but it has now been close to 2 years since they first hit the indie pop scene.

Okay. If the blog slows down for the next week, you know why. I hope to keep it updated when possible.
Posted by xolondon

Women of the Net, unite and torch your panties in protest of XO's misogynistic rants!

Strangle him with your bra, ladies! CHOKE HIM!!

Your neighbourhood looks gorgeous. It makes mine look like a pile ofpuke :P Have fun with the move - it's not exactly an unstressful time but it's satisfying when you put your feet up for the first time in your new pad...

Death Cab ~ i do not like that single. It made me yawn. In fact i thought i was listening to some fake they had floating around to deter people from illegal downloading! Similarly, i was going to review Konk but really had nothing to say about it. It's not bad per se just not very exciting.

Yes! Dangerous Muse! Where the fuck are they now???!

I have the U.K. 12" version of Lay Your Hands On Me produced by Alex Sadkin on CD that I can try and put up on a file sharing site for you to download once I get my Mac computer repaired (it hasn't been working for almost 2 weeks now).

I too love Madonna, but the less said about that cover, the better.
Where did my Ray of Light earth mother go?

Kinda liked what I heard of the new REM, and the last Guillemots was a fave, so I'll have to check it out.

Dunno what happened to Dangerous Muse. Maybe you should try: Temposhark (Immi Heap duet there), Cut Copy, or the Presets instead...

I actually have a Temposhark review coming up soon!

Dangerous Muse are apparently putting finishing touches on their album. They do a weekly update at their myspace which suggests they are busy. I suspect the impatience comes from them being signed the second they recorded a song making the "writing an album" bit seem much longer since most of that period has been in the public eye.

What ever happened with Lorraine? They were so destined for great things...

good luck with the move in your glamorous new neighbourhood.

Thanks for the good wishes. The move happens in about 10 hours! I am worn out! Rode hard, put away wet.

PS to Kulpop - thanks re T Twins! I'll wait patiently...