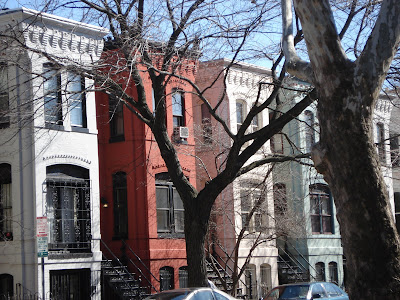 If I seem a bit invisible, it's because I am. I alluded recently to an upswing after a frankly shitty opening to the year: I'm preparing to move into the city. I've never actually lived in DC in all the years I've been working here. We're talking full-throttle city living, with street parking, sirens wailing, etc, but I'll be living in an old row house with lots of character - it's one of the ones above - and even have a patio/garden. I'm not buying it [good God, I cannot afford that], but the plan is to be there for at least 3 years. My current place is walled with boxes. Moving forces one to release material possessions - which should make the soul lighter, right? - but I still have too much. The amount of CD boxes alone is going to be absurd.

So if things get a bit silent for awhile, this is why. Rest assured, I cannot wait to get my normal life back, but it will take some time.
Posted by xolondon

Good luck with the move. My cd collection is back in storage as I couldn't afford to ship it across the country when I recently moved and I do miss it.

My CDs are in the basement. Let's hear it for the terabyte drive!

Good Luck with the move!

Best of luck to you...amazing you've been able to keep up with the posting as much as you have with what you are going through. I moved something like 26 boxes of CDs and records the last time, and decided, instead of slimming down, I would move less often ;) I would have a very hard time living without some physical items. Still, sometimes one is forced into situations beyond their control.

Your neighborhood appears to be simply charming!

Good luck with the move!!!

good luck with everything. The street looks very charming. I know what you mean about having too much. I moved from a studio to a one bedroom and after moving everything into my new apartment, which is bigger than pevious place, I couldn't believe how much stuff there was. How did all that fit into such a tiny place? And I threw away so much stuff before I moved into the new place.

Good luck with your move!

Here here on the good wishes. And yes, we always will have too much stuff. :). I occasionally do the pre-emptive move declutter usually based on stuff that's bothering me today and that I can let go. It's hard.

Yes, I actually started pitching stuff ages ago, but it's still too much. I've ended up storing some stuff at my parent's house (things like letters from my teen years that I cannot bear to give up.). The most harrowing thing was getting rid of 2 of the 4 components of my stereo. Which should not be harrowing since I don't use it much.

Anyway, I have about 10 days until I move. All my CDs are packed and it's a LOT of boxes! Like more than 10 Xerox boxes.

Congratulations! Looks Dupont/Logan Circle-ish. Am I right? If so, I'm jealous, as I've always wanted to live in that area. Adams-Morgan was the closest I got.

Oh I do love the new pad Mister, hope the move runs smoothly and adjusting doesn't take its toll.