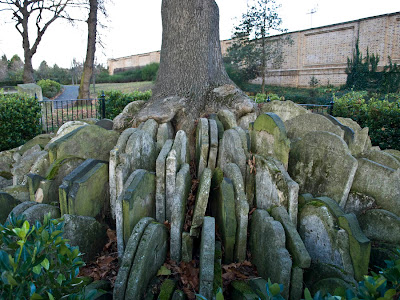 Let us take the month of February and bury it in the ground. The anxiety, grief, anger, depression, panic, etc, etc. We are this close to Spring and, while the exchange rate suggests I won't be in Londinium anytime soon, there's always the music scene to distract me.

The Kooks Always Where I Need To Be
Catchy is not enough, boys. I am in the camp that loves the Brighton group, mainly on the strength of Luke Pritchard's vocals and 2 songs, Naive and She Moves In Her Own Way, which are smart Britpop. The new single features Luke mixed right up front, but it's decidedly lackluster. Some A&R guy may have thought the doo-doo-doo-doo bits would translate into sales, but the song just lays there. "[Wah wah wah] I'm a man on the scene." Well, no Luke, unless it's the "scene" of Tesco shoppers on a Saturday morning.

Duffy Stepping Stone
The Rockferry album turns out to be a solid piece of music with some clear singles and slow burn album cuts, this one from the latter category. If each song has a time of day it should be played for best effect, Stepping Stone is for dusk. It's slinky, yet defiant: "I will never be your stepping stone / Take it alll or leave me alone." As if Duffy's putting on her makeup for a night out - glass of wine in hand - and she's totally wary of the whole fucking thing. [Hmmmm. Sounds like someone I know... minus the makeup]. Expect critics to slash and burn this album, out Monday, but it contains real melodies, vocals and diverse arrangements.

The Feeling Without You
Funny. A song I like, in which my review will sound like I don't like it. Without You is the finest moment on The Feeling's overcooked new CD, Join With Us. I can't even bear to review the full album, I dislike it that much. This song has several things going for it: a great melody, a lush orchestrals, some nice squizzy electronics and a melancholy theme of being away from those you love. I do find it a bit creepy how Dan G-S sings the line "30 dead and one teenage gunman" in an almost come-hither voice, though, and the song - like much of the album - has some outright clunker lyrics: "Even though your heart's in the dungeon / I wonder what the time is in London?" Huh? And a minor detail: no one calls it "North Virginia." It's northern Virginia. Whatever, a solid single.

Delays Hooray
A brilliant title to launch Delays third CD, Everything's A Rush. The song starts promisingly with synthy strings, chiming bells and a nice guitar line. Greg's verse vocals are subtle and cool, but there's something wrong here, perhaps because the chorus has the same melody as A Fine Frenzy's superior Come On Come Out (hear the latter at FF's myspace). That said, Hooray has an urgent bridge and is ubercatchy. Of course, if previous singles Hideaway and Valentine can't propel them, I don't know what will.

Your Vegas In My Head
No, it's not my Vegas at all. A British band from Leeds with Vegas in the name is always suspect. Who do they want to be? The label is pushing them hard, but I was willing to give them a shot, even if they don't sound terribly British. In My Head is pure American radio pop/rock, incredibly slick and a bit of an earworm. Nothing less, nothing more, but it could be a hit. I think I prefer Troubled Times on their myspace.

Supergrass When I Need You
"All the shit that we face everyday / Somehow works itself it out any way." Supergrass has defied all odds and survived for 13 years, out of the ashes of the original BritPop 90's invasion. This track is evidence of how much they've grown, with a sophisticated melody, adult lyrics and an arrangement that straddles the line between slick and practical. "I looked at old photos for hours and hours" sings Gaz Coombes, but his band is not resting on any old image of itself. This track is magnificent in every way.

Email ThisBlogThis!Share to TwitterShare to FacebookShare to Pinterest
Labels: BritPop

I dig that picture, dude. It's wild.

Oh I really like new Kooks single, though someone on PJ did say it sounded a little bit like McFly, which is maybe why I like it that much more than you do? It's not as good as anything on the first album (which I was only introduced to around September last year,) but a nice, poppy affair that I'm humming quite a bit.

Listened to Duffy album for the first time today and agree, it's a mix of imediate and slow growers.

I'm getting over the dodgy lyrics in The Feeling album and now like it as much as their debut. Without You is the next single, in a rather obvious way.

Thanks for the heads up on Delays. I like what I hear!

I couldn't agree more about the Feeling's CD. I really enjoyed the first release, and this one just seems like they tried too hard. Typical sophomore slump??

I'm really starting to love Duffy. I want to tickle her snack cake.

Said only as you could say it, D'luv.

I love "Stepping Stone." I think it's my favorite track. For right now that is.

I love most of the Duffy album, retro and derivative as it is. Much better than that Adele album on the whole. I am loving the new Delays tracks as well (it is a shame "Valentine" wasn't massive)...can't wait for the full length! The Feeling...well...my feeling is similar...overcooked. I can respect what they are trying to do and they definitely have talent, but it's rather tedious over the course of a whole album. Do you think America will get this after the first one sold relatively poorly?

I doubt America will even get a release for The Feeling. The next single needs to do well or they are in trouble.