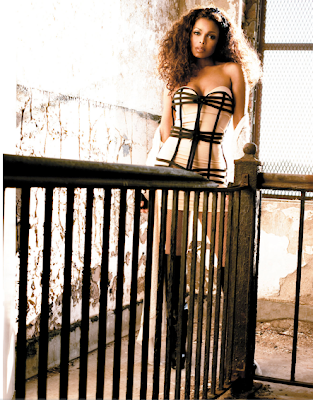 This has been one of the crappiest weeks I've had in many years. As always, my little playlist has been getting me through it. Here are some thoughts on a few worthy new tunes:

Janet Jackson Rock With U
Written by NeYo and, shockingly, well produced by Jermaine Dupree, this song is what Janet fans have been waiting for. It signals that she is not a slave to the American r'n'b market; it's actually more "Europop." Once you hear the pretty, bubbling synth, you know this is not the Janet of 20YO. The breathy vocals disguise the fact that it's another one of her "baby making songs" and when that 90's house beat comes in at 1:08 - it reminds me of Jody Watley - the deal is sealed. You might as well get out your chunky heels. The only (minor) problem: Rock With U is more of a groove than a song. It moves in a rhythm, but never reaches climax. That's okay, because not every encounter should, or can, end with an explosion.

Sarah Brightman Symphony
Like Janet, Sarah's last proper album (Harem) didn't really capture what she does best. This song, the title track to her new album, does. It's an orchestral ballad equal to the best songs on her Eden album (that one highly recommended). Typically, she scales the vocal charts, but it is in English - a rarity! - and it's panoramic enough to have you running over hillsides. Symphony also has a very pretty final 25 seconds. Goddess is in the details.

Idina Menzel I Stand
Sticking with a bit of pleasing schmaltz, everyone needs a good empowerment song now and then. Thankfully I Stand - produced by Glen Ballard - never really topples too far into guitar power pop, a consistent problem for Idina's fellow chanteuese Celine. Be warned, inside the strong melody are self-help lines like "I stand for the power to change." I was in the right mood for it.

Joe Jackson Invisible Man
For those of you old enough to remember when Joe had hits like 1982's Steppin' Out or 1984's You Can't Get What You Want, this song (from his latest CD Rain) sounds like it could have come from his perfect Night And Day album. It is Joe at his best, complete with an intricate piano-based arrangement (Tori fans take note) and a really strong vocal. I particularly like the bit at 1:56:"I used to own this town / Now I'm watching you / Now it's my turn." Joe is 53 now, but his voice remains unaged. Note that this song is making the blog rounds now.

kd lang Sunday
From her new Watershed CD, Sunday is a change for kd. The arrangement is a fusion of mellow jazz and a sort of glowing 60's psychedelia (check out the keyboard trilling through it). Lyrically, it's a slow burn: "Sunday afternoon / Naked in your room / Love is all consumed." The definition of languid, Sunday is like an old photo shot with a pink filter, if you get the reference. "Let the world disappear." Indeed.
Posted by xolondon

I couldn't agree more about the Joe Jackson track. Listening to the whole album brings me back to the 80s, but in a really, really good way.

I was a little surprised to find out Rock With U is a Dupri production. It's a really good track.

Joe Jackson is an incredible talent. This new song is terrific. One of the best steals is finding his albums (even the out of print ones) regularly in the used vinyl bins for $1.99 and less.

It's strange that people still see him as the poor man's Elvis Costello. There was a summer not too long ago where I would put "Steppin' Out" on repeat before hitting the bars with my friends.

I think new Janet is very lovely; it has some slight (very, very slight, mind) elements of "Throb" I thought.

Sorry to hear about your shitty week :(

For the first time in a long time i am almost excited about a Janet Jackson album, it's quite the bizarre feeling i tells ya.

I'm (of course) loving Idina Menzel - a few years back when her debut album came out it was geared towards a Rent audience (her big role at the time) - this one is very Wicked orientated. I stand is lovely as is brave.

Chin up little one :)

I'm right there with you on the sucko week or weekend.

Basically, I feel very "empire is crumbling" or the "other shoe has fallen" right now.

And if it should make you feel better, it seems to be going around. May not, but may.

I do remember Joe Jackson very well. Did he do "Lawyers in Love" or was that Jackson Browne or someone completely different.

My coping mechanisms are music, watching old tapes of that 80s show and Anne of Green Gables III. And of course, playing with my cat who seems to have vampire tendencies.

I really hope this next week is better for you.

I'm with you. Last week I was sick as a dog, had a barrage of work I couldn't put off, had a freak snowstorm, got sideswiped by a police cruiser and discovered I am a (step) grandfather.

Sometimes you're the bug, I guess!

this could be one of your more gayer playlists in a while. not that there's anything wrong with that!

I heard the Janet song on one of the bmore R & B stations while driving around on Sunday and it was love at first hear. This is the Janet song I've been DYING for!! Maybe she can do it again after all.

And surprised an impressed that your digging on Idina.

Cheer up, doll, you've still got your crotch!

Anyway, thanks to all for the wellwishes... but where is the cash money? Joke!

PS - Thanks so much to the folks who commented on this post that have not commented much before. Feel FREE to blather on about any post!!