Mixtape: I've given all I can 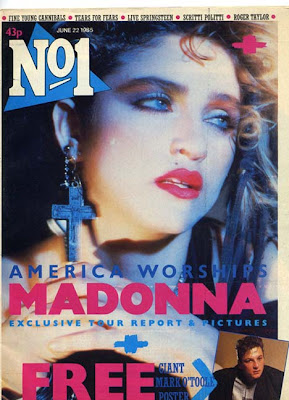 Rather than post a pic of the new Madonna, I thought I'd post the first image I liked of her. I had a foldout 7" Borderline single with that photo and I put it in my locker in 7th grade. Borderline b/w Think Of Me.

Still no new Duran Duran single in sight. I keep checking their website. I will be suprised if their label gives up so early.

Death Cab for Cutie has a new CD called Narrow Stairs, out on May 13. What happened to The Postal Service album? Booyoudeathcabwhores. The new single is called I Will Possess Your Heart. If you don't know Death Cab, try 2 songs: Transatlanticism and Marching Bands Of Manhattan. There must be a plane of existence where this band is as big as U2... they are a f*ck of a lot better than Coldplay.

I still love the Design Scene blog. He recently put up a link to the wicked Stevein Klein Studio site. I do wish Madgedonna would move on from Mr. Klein though.

Sam Sparro: There's been some tiresome reaction to him on PopJustice that I find deeply disappointing. If it isn't anti-gay, it's gay obsessed. Like this pearl: "Good HEAVENS did they dehomosexualize him for the new video. I am impressed." Yes, the first video was tacky tacky, but that wasn't anything to do with the artist's sexuality. Another poster called him a "vile queen". To quote Morrissey (ironically), the world is full of crashing bores.

Captain's new album is called Distraction and is due out in the summer (date TBA). The first single is not the tepid Animal, but (say the band) "the rather wonderful and obscenely catchy" Keep An Open Mind, out on April 14.

Supergrass has a new album called, pleasingly, Diamond Hoo Ha - check out Obscure Sound's write-up of the band. My favorite Supergrass tunes are Alright, Moving (epic!), Kiss Of Life and Low C. Of the new tunes I've heard, I quite like When I Needed You, which is available at the link above.

Quiz: Does anyone know the strange, complex connection between Supergrass and the Rossdale/Stefanis?

Did you hear that Mutya Buena was dropped from her label? No crying, chavs'n'cholas, pencilbrow deserved it. Never has there been a more disastrous solo album from someone so talented.

That new song Century by The Long Blondes is shockingly bad. I downloaded it after reading all this great stuff and the vocals are painful.

I was speaking of Duran the other day with someone, and we thought it was a shame Falling Down wasn't bigger, although we agreed Nite Runner was the song to get this album noticed. Maybe it is time for them to hang it up. If Timbaland/Timberlake cannot get them noticed, there is little hope. Maybe their label is to blame?

Can't believe you had that Madonna pic in your locker too! I actually cut my 7" cover of Borderline to fit in my locker as well! You cannot imagine how much I regret taking a scissors to that now! Stupid teenage mistakes!!!

I know the Supergrass/Rossdale connection of course. It involves a rockstar who used to date a genderbender and then impregnated a future rock drummer's wife, and he is now married to a lady who looks like a genderbender.

That Madonna pic takes me back. I probably bought that magazine! 43p!

I know your post wasn't about the magazine but Oh how lovely was Number 1 magazine? My god i was obsessed with reading that magazine as a pop music loving teen in Australia.

If Duran Duran don't release another single (ie niterunner or skin divers) then surely someone at Epic A&R needs to be sacked.

She may be dropped but Mutya made the best pop record (Song for Mutya) in my eyes last year and that counts for something!

I was not happy with this Duran Duran album. SO flat.

I think the greatness of Song For Mutya was more to do with Groove Armada than the bored-sounding girl who sang the words they gave her! :-)

I heard the new Supergrass album.

There's some crackers on it.

Fav Supergrass tune? Toss up between Mary & Late in the Day.

I dunno, I think this Duran album was probably better than the last several. Astronaut seemed forced, Poptrash was a mess, Medazzaland had 3 good songs (Electric Barbarella, Out of My Mind, Michael...), and Thank You, well...

At least they sound like they're having fun. The Valley is quite Planet Earth (love JT's bass), and I like Tempted, Nite Runner, and Skin Divers a lot. Just when I think I really like all the clubbier stuff, Boxfull o'Honey has really grown on me in an old school sort of Duran way (very Too Late Marlene).

Agree with the Groove Armada thing. It could have been almost anybody. Shame about her album.

Okay, I will answer everybody, Answer Whore that I am:

Countpopula, I agree that Red Carpet was good and that it was Andy Cato's year (Andy of Groove Armada).

Phillip, it breaks my 80's pop heart that none of those mags exist anymore.

ElMarv, what would Le Bon say about that?

Darren - what is the best song on the new Supergrass CD?

a mixtape post and i'm so late commenting on it! I'm with Phil and you on missing these magazines - Smash Hits,Number One, Big, etc. Tragic. I'm quite excited for new Death Cab, but had to run and listen to Such Great Heights. Thanks for reminding me :) Captain's album better not let me down, which also reminded me, what the eff is going on with Lorraine???

I'm not sure what Le Bon would say. I think the production style doesn't do anything for their sound. Last album captured the feel of their early albums. I liked it.

"Pop Trash" was one of my favorites. It's definitely a musician's album. Warren and Nick did tremendous work on that. Bring Warren back! (and his nuddie pics too!)

"Medazzaland" was pretty bad, except for Electric Barbarella.

Red Carpet Massacre was a big ole disappointment. I can't believe I'm typing this, but the Timba songs were the best on the album. Why they were not released, especially first, is beyond me. That's kind of like buying a Ferrari and then leaving it in the garage--forever.

I liked Electric Barbarella too. :)