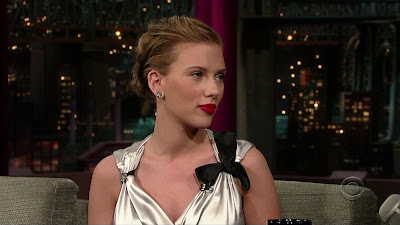 I'll start with Scarlett Johansson so I can post the picture of her above. Pity she's not a pretty girl, eh? Rolling Stone has a piece on her new Tom Waits covers album. It has the eyebrow raising title Anywhere I Lay My Head and features David "60-going-on-25 Bowie" on guest vocals. That's what happens when you are are ScarJo: music icons beg to sing backup for you. Funnily enough, I know none of the songs on the CD, so it will seem all shiny and new. Unlike ScarJo herself, who seems to get around Hollywood, if ya know what I mean.

Does anyone else find the irony in Mariah Scarey calling her album E=MC Squared? Really. She's not exactly Marie Curie, clutching her minidog, tottering around in hotpants, badonkadonak and tatas thrust out. The new single is tediously autotuned. What producer sees the need for Carey's vocals to be cleaned up?

Dark secret #1: I am having trouble caring about the new kd lang CD. There are some strong tunes (Sunday, Close Your Eyes), but several songs just lay there with predictably MOR arrangements. It may be a grower.

Dark Secret #2: The new REM song is phoned-in. The lyric isn't terrible but the song itself is really Supernatural Superserious Superdull. Watch it now.

Dark Secret #3: Athens G-A has a problemo because I also don't like the new B-52's song. I know, I know.... but I love tomatoes and black-capped chickadees!

Keane's new CD is out July 7 according to play.com. I'll believe it when I hear it from them.

I recently caught up on my music links to the right. The newest blog is MuuMuse. Brad is wee bit obsessed with Titney, but I am focusing on his willingness to actually review new songs. I also like Mine For Life for retro stuff from the 80's and 90's.

I have a review of Goldfrapp in the March Instinct. I also did a wee newsy bit on Temposhark, in which I get the singer to comment on whether Not That Big, his duet with Imogen Heap, is meant to be dirty. See the mag to find out...

Heat recently took a Who's more annoying? poll. Joss Stone or Natasha Bedingfeld? Obviously Joss "Fuckin'-for-tracks" Stone! Which reminds me that I love the blog called The National Society For The Prevention of Joss Stone.

The Carly Hennessey/Smithson controversy on American Idol kind of bores me. Here is the infamous 2005 Wall Street Journal piece on her - it captures the moment the music industry began to implode. Her Gregg Alexander-produced CD cost 2.2 million and sold like 400 copies (I have one!) But is that her fault? Not really. If she's a good singer, she's a good singer and it doesn't really matter if she's had an album out.

2. Toons 'N Tunes is having a Laura Branigan (RIP!) Moment.

3. A Patrick Wolf fan on his livejournal page posted this question: "Hello, I was just wondering if anyone knows what Patrick is doing with his hair right now...is it blue? Is it red? Is it curled? Is it ever changing like Eternal Sunshine?" Bless fans.

4. Donna Summer's new single is called Stamp Your Feet, as reported by ElMarvelOso.

5. After a few weeks of my life seemingly going down the dumper, things are on the upswing now with big changes coming. More news soon...

I was briefly excited about both the Mariah and janet albums (for perhaps the first time this millenium) but i think that has passed. I will of course check them out but they don't seem to hold the allure for me that they did all through the 90s. I will channel that into hoping for the best from the Keane new album. I read somewhere (maybe Q?) that they were looking to release maybe 4 EPs instead of an album... who knows?

Sad to hear you don't like the B52s song (yuri will be sad), thrilled genuinely to hear your life is on the up and congrats on the Guardian write up! hurrah for inaccurate reporting!

I can't stand Mariah's new single. That style of R&B does nothing for me. She does look good in the video.

Haven't heard the whole k.d., but I do like the feel. I'm sure it'll be a grower for you (no pun intended).

I love the new b-52s! Working on getting a copy of the album.

Thanks for the mention!

Glad to hear that things are on the upswing. Just remember what Howard used to say... (2nd album)

Funny you should mention not liking "Funplex". I have a sinking feeling the B's know it won't make radio. At the show in Jax last week, Kate sort of parenthetically told us to "call the radio station and request it". That's not really how it works, and I can't remember the last time I listened to the radio anyways...

Oh well, I hope it does well for them, in spite of your "no likey".

And thanks for the link mention!

Apart from all the usual reasons to be annoying, I can't get over her (stage) name being a kind of spoof of Joss Stick(s).

Unlike the new The Feeling album.

i share your dark secrets, all of them. but i will say i had an amazing nap to kd lang's new cd.

Am slightly disappointed with the B's too, but they can't expect Funplex (the single) to grab attention without a promo.

I expect a lot of diehards will be buying the album though, myself included.

RE: B52's track; have you heard the CSS Remix? Pretty good, made me like the song a LOT more. Can't say the same about CSS's "Wow" remix, which I think is the stinkiest thing they've retouched.

Glad the sun is starting to shine again on life mister.

I'm no longer excited for new Mariah, eager to hear Janet's album because I've been Control/Rhythm Nation/janet./Velvet Rope'ing it something serious all week (which I'm sure is probably going to make hearing the final product that much of a bitter experience, perhaps,) and am ready to explode with anticipation for Madonna's new bag of tricks.

Ah, such is life. The B's have been gone for 17 years, so expectations are going to run impossibly high. Maybe if you go into it with the idea you'll be disappointed, you'll be pleasantly surprised. That's what I did with the kd lang, and now I really love it. Is there a better singing voice, seriously?

I really like the CSS remix of Kylie's "Wow", although it was pure class to begin with and didn't need a remix to make it better.

By the way, those new Kylie B-Sides are the best she's released. All three shoulda made the album.