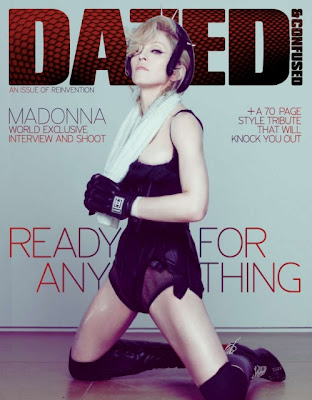 I personally don't like this photo. You can't really see her face. It's blurry, strangely lit and poorly cut out over the lettering. AND it looks just like everything Steven Klein does.

And what about that Hard Candy? Read this. UPDATE: 2 rumors, one that Steven Meisel is the photographer for her Vanity Fair cover and two, that Candy Store is identical to the craptastic leak from 2007.
Posted by xolondon

Maddy, please. Are we still doing the leotard thing? You're incredibly fit - I get it - but you're nearly old enough to be my mom. Put some clothes on. Thanks.

Yeah, now she's like Travolta's girlfriend in SNF going to box with Rocky. It's underwhelming.

A part of me agrees with Joseph but I think all power to her.

Wow! Glenn Close can still squeeze into a leotard?

So what was that again about Mariah not dressing appropriately for her age, luv?

yes she looks amazing for her age, yadda yadda yadda, why doesn't she embrace fashion. if this album is going to be r&b/hip hop influenced then why doesn't she dress accordingly, bling, furs, i don't know anything but the friggin leotard!

In Madonna's defense D'luv, unlike Mariah, she doesn't exactly go for a visit to Sears looking like she should be working a corner, rather than shopping near one.

That said, I'm with you xo; not a fan of this picture. Very meh. Klein can go now (even though one of my all time favourite Madonna pics of recent years was shot by him - you know when she's in that red sparkly dress dancing from Confessions? Amazing, I want that blown up and hung in my living room,) but the news of Meisel possibly doing her actual album shoot excites me - I'm interested to see what he can bring to the table.

But it's definitely time to move on from Klein. But I don't want her to do a complete spring clean of people she works with...am hoping she keeps Stuart for her tour and also lets Cloud play on stage as a dancer for at least one more album. I like both of them and would be pleased to see them again.

At least Madonna isn't dressing like a 13 year old who just developed breasts!