Take me back to Tigercity 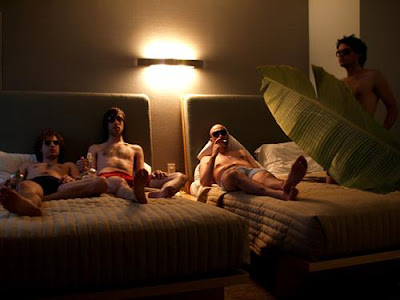 Does that picture get your attention?
Tigercity is an American band. On this blog. Rolling Stone named them an Artist To Watch, but who pays attention to Rolling Stone [shiver]? They come to me via The Goddess That Is Tracey Thorn, who put them in her Top 10 list for 2007. A few weeks ago I heard The Gadsdens, then I heard Sam Sparro and now this, Tigercity singing Powerstripe. New artists, each unique from the other, all with PERFECT songs.

They're from New York City, but formed during college in Massachusetts. They're quote hairy blokes, but the singer is, thankfully, the bald one (the Royal We support baldness). Their influences are eye-catching, supercool and clearly honest: Prince, Talking Heads, Daft Punk, The Cars, Prefab Sprout, David Bowie, Chic, Earth Wind & Fire, Roxy Music, Beach Boys, Kraftwerk, Steely Dan, Hall & Oates, and - they're they are again - Scritti Politti.

I feel guilty posting a full song here, but I want you need to be able to click that little green arrow to understand why this band is so good, so I've posted a 90 second sample*:

Buy the Tigercity songs or EP, Pretend Not To Love, on itunes or from their store. *Thanks to Jason B for extracting the sample for me!

Email ThisBlogThis!Share to TwitterShare to FacebookShare to Pinterest
Labels: Tigercity, Up In 08

I do indeed like this song. Thanks for sharing, Xo.

LOVE this! Could this be the year when American music is actually alright again?

Wow, great track! Managed to find it and a bunch of tracks by them on a variety of music blogs. Thanks for the tip.

Damn you and your great taste!

I think you supply about 75% of my new music crushes!


They remind me of an American version of that French band Phoenix. Which is good.

They've probably been on other blogs like Into The Groove and I just didn't notice!

It's so...shiny. With those influences, I'm afraid I was expecting something much different. Everything is starting to sound very mid-80s and not in the good way.

I found Tigercity on Myspace, about 6 months ago. I've been a big fan since then. I can't buy their cd since I live in Athens and don't use a credit card for shopping online but I'm on their myspace page 24/7, listening to their songs. Are u Sensation is great too!

This "royal we" completely supports the bald, especially when they're not bald all over...

I missed my chance to see them in December in Mpls. That'll teach me to read your blog more faithfully.