I feel so wonderful 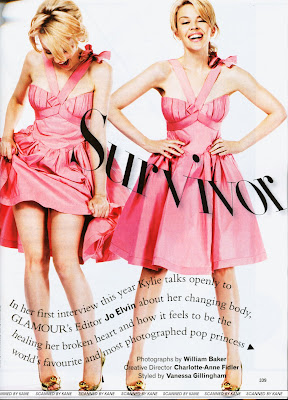 It's hours until Kylie's new single Two Hearts hits British radio, but the song has already leaked. It sounds like it is the exact Kish Mauve version with her vocals laid on top. S'okay little petals, it's a great, anthemic glampop track, though I am not sure she even bothered to record the backing vocals! That does not sound like her on the wooh! hook. Overall, I think everyone would be more likely to fizz at the slit over this if no one had ever heard the Kish Mauve version (which is the same). Sorry for my part in that ruination!

A few comments on the video: 1) The piano player is the real star and surely had to go to the ER afterward. 2) I am confused by the visual motif. On the one hand it's a Goldfrapp-ian glam theme, but then we have Marilyn Monroe hair and skull imagery on top of that? Confusing.

Kylie.com also reports 2 new b-sides: I Don't Know What It Is and King Or Queen

I'm looking forward to hearing it. I like but don't love the Kish Mauve version.

it is very kish mauve isn't it? Luckily i loved that track too so this is working for me. Still i can't help but feel Kylie could have pulled something even more magnificent out the bag...

In an act of willpower previously unprecedented, I held off the leaks till the premiere... and I have to say it does sound totally fantastic on the radio. Finally.

I think Paul de Z miiiiiight have a point but (from my perspective) in the sense that this song could *so* easily have been ramped up a notch from the original. Maybe KM loved the original? Who knows. The fact is that 99.9999% of people listening to the radio this morning will never have heard "2 Hearts" before and, as predicted, will be going "I'm in love! WOOOH!" all day. And surely that's the point.

Will track down the video after another hard day at work!

I didn't love the Kish Mauve version, but Kylie's voice does make it more charming. Still, am disappointed there wasn't a shiny new production job done on it.

The Girls Aloud song sounds like a b-side. And not one of the great unsung GA b-sides, either! :(

Apparently, this autumn, Sugababes win all.

this is truly great. better than 99% of all the other stuff out there.
plus, the video is white hot !

i have a feeling that kylie actually loves this song...

she did really just add her vocals didnt she? that made me a little depressed. no other change at all. but it's still a super-hot song so good for Kylie, make it a huge hit, kudos to her for finding Kish.

It sounds quite good. It passed the multiple repeat test in my iPod with flying colors. Is there any info on which teams will be providing the remixes?

Love that she's staring at her pussy!

The skull motif was probably a statement about mortality, in reference to what she recently experienced.

D'luv, I changed the photo, so your insightful comment is not so true now! (sort of)

Skull=mortality? Is she that deep?

The is indeed a faithful copy of the Kish Mauve original but I still like it a lot already. If there's any justice this would be a HUGE hit in America, but with the current state of US radio and Kylie's US label already messing up the release of the album (the single won't drop here until next year) that isn't likely to happen. But then if Britney can still have a hit record in spite of her trainwreck persona and her own label's lack of promotion, why not someone who her shite far more together like Kylie as well?