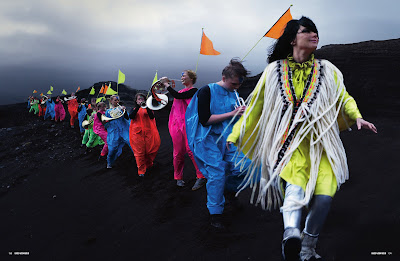 That saluation above is long overdue, no? I needed to steal it from the Beau de Blogger who actually likes to say it. Here's the blah-de-blah for the end of the week...

Above is a recent picture (from Dazed And Confused mag) of Mama Bjork skipping across who-the-fuck-knows-where with a bunch of Teletubbies. She is whack! See more at Design Scene.

The new Alison Moyet album has a tremendous song called The Sharpets Corner (Hollow). Some major singing. Get it at iTunes UK. Cannot say I am in love with the whole album, The Turn, but that song leaps out, as does the single One More Time, a real grower. Very Dusty Springfield, that one.

I guess the Times did not see any point to the Kylie movie. Sounds a bit disappointing, what with no giving head to bottles, etc.

Most British Song Title of The Week is by Stephen Duffy and The Lilac Time: Parliament Hill Fields. These people do these songs to torture me! Stephen has a new album out Monday called Runout Groove. He's such a comfort. Hear the country-ish album now.

I have to admit I do not like the Duran Duran video (see it now). Those guys are way too ED riddled to be scamming on those young models. Girls on film what ya doing, girls on film.

I now have a whopping 4 friends in Facebook. If I messaged (or poked!) you, won't you be neighbor?

Dangerous Muse is back with a new song for... Halloween? How odd! It's not terrible (hear it on their myspace). As for Mike's hair, Billy Idol called and wants his look back.

I keep reading about Basia. Errr, Basia of the 80's? No! This is Basia Bulat. Check her out - she's a lovely folk girl. I like Snakes And Ladders.
Booyouwhores to The Hype Machine for destroying their interface. The new one is most wasteful of time and space.

Girls Aloud. Hmmm. I am not sure where this group is going. Although I like Call The Shits - sorry Call The Shots - it's not exactly a risk, is it? GA has three modes of song: Really fast (The Show), midtempo (It's Magic) and ballad (Whole Lotta History) and within those modes, the tracks can be very similar. Their videos (bar Whole Lotta History) tend toward cheap plywood sets, too many hand motions, etc - and the new video wastes the LA location. But this has all been done before, hasn't it? They need to be careful or fans will get bored and find a new girly group to bicker over. Especially now that Nadine lives all over the world (not such a nermal girl now) and Sarah Harding has the worst haircut ever in pop music. She looks 40!

I like Delays new single Love Made Visible. See full info at Torr (thanks to me, LA bitch!).

Don't get me started on how angry I was this week about Bush using the phrase "World War III." He and his team should be jailed. Locked up in a Turkish pokey! See how they feel then about torture. He makes my skin crawl! [As does Vladdy Putin, who seems to have lost his mind.] Anyway, please note that Bush used that phrase in the context of talking about Iran. It is SAME BULLSHIT TRICK he used with Iraq and no one seems to notice he is ratcheting the up the deceitful rhetoric again.

To end on a happier note, this woman is deliriously, joyously insane. I love her, if not her muzak.

I almost sprayed the diet Pepsi I was drinking onto the computer screen when I saw that nasty photo of Celine and laughed out loud. Two words: HOT MESS.

Beau de blogger here, Darren. I love that phrase, there are so many bad ones on the net. Yours works perfectly. I'm on facebook. Come find me. I'll poke you!

I'll look for you LeDazzHot Baby. Beware, I've been poked many times and may not even notice anymore...

I'd poke you on Facebook if I knew your real name! I am Dan Hollingsworth, in London regiony group thing if that helps.

Sarah Harding WAS a Cylon. Now she's a Cylon who visits a Romulan hair salon. I am such a geek.

Had I been drinking when I read your comment Dan, a spit take would have taken place.

Anybody who reads your blog knows you are a geek! Am still loving Torchwood, though last week's cannibal ep scared moi.

That Delays song is excellent! Valentine was one of my favorite songs last year (could a song be more joyful sounding?) and this looks to follow suit, albeit in their more trad jangly way. Thanks for the info!