No, no, no. Not Perez Hilton...SHIMON Peres. 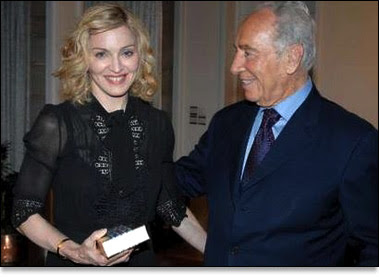 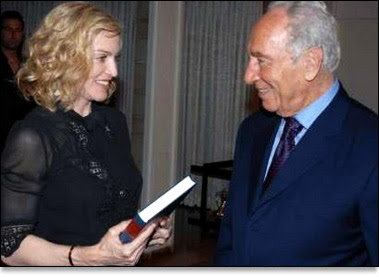 That's Esther Ritchie looking demure with President Shimon Peres in Israel. He gave her a Hebrew Bible (inscribed?) and she gave him a Zohar (Kaballa text), which you just know she was re-gifting!

'The president and Madonna discussed how to advance the peace process, and conciliation and tolerance throughout the world,' said presidential spokeswoman Ayelet Frish. 'Madonna told the president she wants to promote those messages in her songs and books, and how important it was to educate children with those ideas.'

So I guess her new songs Candy Shop and Lala (the one in which the lyrics are different names for coffee) are a part of her global message of peace and love. Now I understand.

Bless her, I think she means all this. If she could just be a nicer person ona day-to-day basis, she'd almost be... Annie Lennox! Say what you want about Madonna's political/religious aspirations, Peres is long way up from the days of Dennis Rodman...
Posted by xolondon

one starving musician came by to say: They look roughly the same age, don't they?

She "wants to do something different"; she's "tired of the same old", and this is a step up from the days of yore but I'm wondering if Pharrell Williams is all that big a step up from Dennis Rodman...

Personally, I would agree - so much is made of whether or not Madonna is authentic in her spirituality. But based upon what I saw in I'm Going To Tell You A Secret, I would rather spend the day with that Madonna over Truth or Dare Madonna any day of the week.

That's been part of the fun of having her in the spotlight for a quarter century - we've really seen her change and mature. And not just in a re-invention way either.

all i can think of to say is i haven't heard LALA but i am still trying to get over Candy Shop. On the plus side i'm starting to really like Beat Goes On.

What is that woman doing! Israel just announced that its been attacking Syria without the world knowing!

You mean, Syria, that well-respected nation of political innocence?

Anyway, is it me or does Her Madgesty look like Amy Poehler in those photos?

I am hoping the leaked Madonna tracks were all a huge socially awkward misunderstanding and that this planned album will be shelved post haste, to make room for a proper quality follow-up to Confessions. THE BEAT GOES ON is partly passable but is still generally sub-par, methinks.

I completely agree with you xo and Dan on the honesty of her spirituality. "I'm Going To Tell You A Secret" was a bit of a big thing and really helped me kind of understand what her new found sainthood was all about.

Is it wrong that I like "Candy Shop?" I mean, it's really bad, terrible, shocking, and an absolute nightmare, but I find something deliciously comical about singing the lyrics "sticky and sweet (my sugar is raw)"

Yes Doron, yes Syria has huge issues with human rights and so forth but really-i dont think Israel is helping their people-or anyone actually-by firing weapons on a country that we all know is a bit sensitive at the moment.

I am not saying Madonna pressed the red button either. ;-) I just think perhaps now is not the right time to be shaking hands with people who represent a parliament that is wanted for war crimes by the UN.

I kinda liked Madonna in the days of Dennis Rodman. Baby's got a secret, y'all.