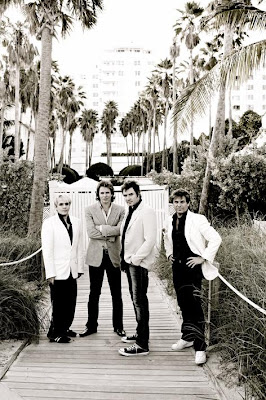 Who knew that Timberod and Timbaland would do a song for Duran Duran that was a mirror image of their own music? What a shocker! It is typical Timba: a repetitive, thumping groove. One that will make dudes who don't know Duran exclaim, "This shizz is hawt!" as they pick up a stripper in a club called Platinum or Bed.

It might grow on me, but for now Nite Runner is the sound of me getting old. There is a point at which we'll be so saturated in Timbaland's sound that the music will become dated very quickly. I feel like he is the most popular kid in school and I am a geek staring at him from behind my notebook.

Meanwhile, back at the Converse All Star store, Sugababes are turning into Avril/ Kelly Clarkson
Posted by xolondon

Oh, that's a bit of a disappointment. You'd have thought that a combination of a legendary, iconic artist with today's most in-demand producing duo would create something amazing...

Get up offa your rocking chair, grandma!

Well, actually, I had the same reaction when I watched that live clip of them in NYC a few months back, doing the song... it sounds like "Notorious" -- which is a song I like, so I like the new one, too.

I don't know, I don't really have a problem with who's doing a song, as long as it's a good song.

Oh I am well excited to hear the Babes' track in full high quality now. That chorus sounds fab.

The Timbaland du jour production gets on my nerves. I wish there was a version that didn't have his and Tinkertoy's fingerprints over it so I could judge it properly.

These days it seems like it's 1979 again, where everyone and their mother had a disco record out regardless of wheter it's an appropriate genre for them or not, only this time around it's Timbaland/hip-hop. Sheer overkill. Madonna, Duran Duran, Celine Dion? We're so headed for a "Ethel Merman Disco Album" in the near future.