The Queen kills it in Louboutin 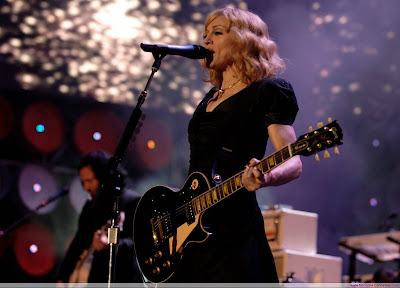 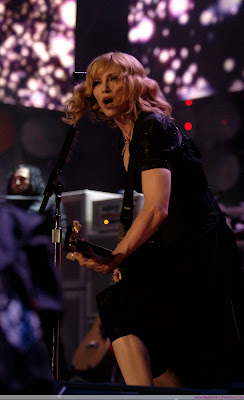 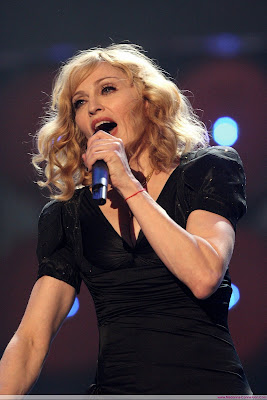 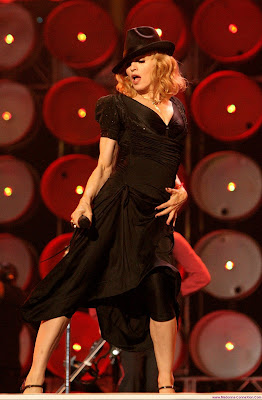 Much like her Live 8 performance two years ago this week, Madonna rocked Live Earth. She never does anything half-assed. Hey Poo was pootiful, true, but she did the best she could with such a weak song and I think she was the only performer to create original material just for the event. The rest of her set was great. I liked the Courtney Love-ish guitar in heels on Ray Of Light, especially the feedback spasm at the end (with Stuart Price!). Still under some sort of Borat-ian influence, her version of La Isla Bonita was the highlight. I especially liked the (Russian?) dancing they did while crouched low. Nice hat too. Hung Up, although it was the same performance she always does, continues to be a better live performance song than something you'd randomly play on your iPod. Do you think the Gogol Bordello guy's appearance at the end was a surprise to her? Could've been.

Most typical 00's moment: Madonna singing up close to the audience near the catwalk. She's less than ten feet from them and they are all looking at her face via a tiny a camera screen. Put the goddamned digital down and have a moment! Somebody else will post a picture. Everyone is so worried about capturing the event that they forget to experience it.

UPDATE: Louboutin in the title refers to her red-heeled shoes. If you want to read a good post about this performance, check out Adem's at IAR. I agree that this La Isla Bonita (watch it!) goes into the pantheon of great Madonna live performances, though I'd still call the DWT version definitive, if only because it was the first time I ever really believe she was happy on stage.

The colored links go to youtube videos of the performance.
Posted by xolondon

I'll look forward to seeing her performance after all the brilliant press today, but, XO, it's SO TRUE. Put away that bloody camera and look with YOUR EYES. I don't mind at gigs when someone's Nokia, 3 people in front, blocks out the singer, but when Madge is 2 feet away, PUT IT AWAY!

I'm still on a high from watching this. That is all.

On the over-use of the digital camera, I am with you and Phil. I have actually made this mistake. The photos are nice and all, but when I saw her at Wembley Arena I wish I hadn't bothered really - I have the Confessions DVD - why do I need poor MPEGs?

Hey Poo, as I had rather assumed, comes over much much better on stage than the so-so recording. It's far from great, but the anthemic nature of the thing and the event itself does transcend it's weakness. I love the moment when she hugs that choirboy, and he just keeps on singing: "I'm grooving with the Queen, bitches!"

It's no Debbie Gibson singing Whose World Is It Anyway at Live Earth 1990 :P

She swore. How big and clever!

I didn't actually watch it but wanted to add my disdain for people watching live events through their camera phones. It happens at all the comedy shows I go to now, buy the bloody DVD afterwards and just watch the damn performance with your eyes, puny humans!

Still, glad the planet is now saved. Thanks popstars.