Sarah Nixey will be your guide... 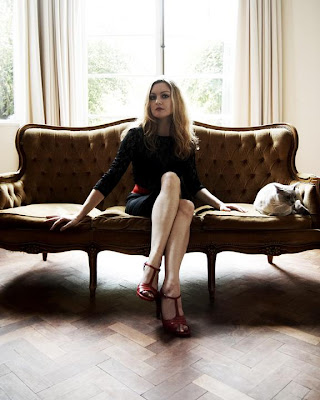 The Lady Sarah Nixey, above, rocks some killer red heels in her gracious drawing room. Her new single is a cover of Human League's The Black Hit Of Space. It's out on July 9 and is backed with a remix and a lovely new version of Strangelove that is a sort of Felt Mountain-esque take on that track.

Feeling Anglophilic and maybe a bit fanatical, I laid ten roses at Lady Sarah's London doorstep one recent rainy night, each with a question tied to it. In turn, a black Rolls pulled up outside my hotel one evening later. As I gazed from behind a lace curtain in my window, I saw a figure in a wide brim black hat, dark glasses and blood red lips reach into her valise to slowly remove... a flashlight (torch). In Morse Code I received the following answers.

That is how I remember this exchange anyway...

XO: There are an infinite number of possible cover songs. What brought you to The Black Hit Of Space?

SN: The song drew me in, like it takes everything in. I could barely breathe by the time I came to record it.

XO: Your new video is horror influenced and, well, England is a very old place! Do you enjoy cemeteries?

SN: Cemeteries are beautiful places. I have friends who live next to one and we often go around reading the gravestones. There are three cemeteries worth a visit in London if you’re ever in the neighbourhood – Kensal Rise, Highgate and Hampstead. My five-year-old daughter has a fascination. This morning one of our cats brought a bird into the house. Ava buried it and wrote on a makeshift gravestone ‘Dead Bird’.

XO: Am I right that you are from Dorset? Dorset is the land of...

XO: What is your favorite London neighborhood?

SN: I love where I live now - North West London. The beautiful Hampstead Heath is a stones throw away and the city centre is a fifteen minute ride. People still steal things off your car and take your scooter for a ride around the block without asking, but you can’t have everything.

XO: Do you have a faraway place that you consider an escape? What makes it special?

SN: My boyfriend comes form Orkney – the islands off the north coast of Scotland. I love going to stay there in his family’s old farmhouse. With sea views all around, complete silence at night and vast amounts of space, London can seem like hell on earth, but I always want to come home.

SN: Leonard Cohen – I’d ask him to sing a duet with me. Ken Dodd – the veteran English comedian who has made me laugh since I was a child and is the last of his kind. Ian McEwan – I’ve really enjoyed his books, particularly The Cement Garden and Enduring Love.

XO: If you were not a musician / mother, what might you do for a living, knowing your own particular skills?

SN: I’d be a radio broadcaster, probably for the BBC World Service.

XO: Has Andrew Ridgeley responded to your Black Box Recorder song about him?

SN: Much to my surprise, he has never responded. Neither has George Michael. He could have used the opportunity to make a wonderful come back. I’m still waiting.

XO: If you were a teenager today, is there a current artist you think you'd be following in that obsessive teen way?

SN: Art Brut who are just breaking through in the UK. Lovely boys. Also, The Arcade Fire - ‘Keep The Car Running’ is a fine pop song. [ed: Watch Emily Kane by Art Brut]

XO: This is primarily a pop music blog. Could you recommend a not-so-well-known pop song (ballad, mid or up-tempo) that you think I and my readers should hear? This is with a very wide definition of pop...

SN: Klaus Nomi’s Total Eclipse. Nomi was born in Germany and moved to New York where he became known as a very theatrical live performer. He had an unusual vocal style, that’s perhaps not to everyone’s liking, but a true artist nonetheless. He was one of the first celebrities to die of AIDS (1983).

A happy note to end on.

Speaking of The League. As part of the 30th aniversary of "Dare", they are doing concerts in which they do the entire album. That would be a nice show. Hope they bring it to the U.S.