Somehow this post lingered in drafts for 4 months?! Let me give it the gift of life now. 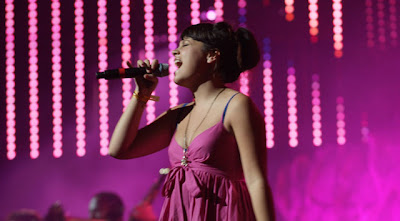 So, I went to see Lily Allen at the 9:30 Club on Feb 16 and didn't blog it as I was lazing about in post-Lily euphoria. This was her first tour in America, 7 dates only and she kicked ass.

It was a freezing night here in DC, with snow and ice all over the streets. I had a ticket to sell outside the theatre and ended up giving it away (free) to some persistently sassy queen and his supposedly moneyless little girl friend. It was fekking cold and I am not into selling on the street. Anymore. bada bing!

Lily had a cracking band with three horn players. Two of them stood next to me in the balcony and danced to Wham before the show. I didn't know they were with Lily until she came out and stood there too. Gahh. I chose to play it cool, dudes.

Don't listen to that ol' slag Chartrigger! All the bullshit swirling around Lily is white noise. She is a great live peformer and if you don't believe me listen to her complete live performance at the 9:30 Club from April 8, 2007. It's near perfect. She had one of those little sound effect machines on a stand that she would randomly launch as she bounced around the stage. Machines guns, crowd noise, etc.

She wore a very lowcut black Lily Allen-ish dress (duh) and large white "trainers." She had her hair long and kept pulling it around her shoulder on one side.

That's Lily above (clips from my DC show) talking about the things that annoy her. Let's get something clear: she is anything but a bitch. She had a great sense of humor only hours after losing the Brit Awards and she only got slightly tipsy. Watch the clip below where she questions a fan who keeps screaming "A-T-L!"

On the slower tunes, she sang her little heart out (see top pic from another show). Her voice was so sweet on all the songs, actually, including her Keane and Kooks covers. Not that her songs require vocal acrobatics, but she was very good. This last clip is from a different show, her singing Naive with a "fag" in her hand. Listen to her singing that one on the pink link below, at about 33 (and a half) minutes in. It is goddamned precious.

just smile. I go ahead and smile.
Posted by xolondon

You neglected to mention the best part about this show!

That would be my new hat?

Or would that be YOU!!