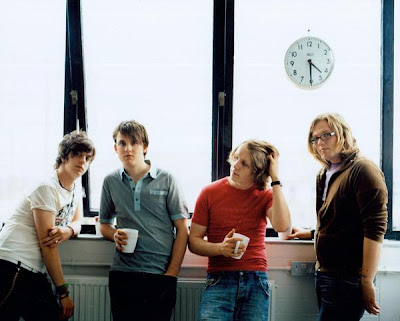 When Kent's GoodBooks (that's a big G, big B) launched their single Leni in late December, I wanted to like them because I needed a new BritPop band, but I found them to not quite pop the way I'd hoped. Things have changed: just a few weeks ago I featured the video for second single The Illness, which was a vast improvement over Leni.

One month later they have another new single, a narrative song called Passchendaele (I know, wot?! It's the scene of a great battle in WWI) about a father and son who die in consecutive wars. It's very Masterpiece Theater, this blazing pop song that welds indie-sounding verses to a melodic history lesson of a chorus: "He carried English bayonets in an English way / He smoked Java cigarettes on Christmas Day / He never made it past 25 / He died on Passchendaele / Fighting for a cause / In a war to end all wars."

There's something about the track that reminds me of Talking Heads. Well, Heads if they'd been sung by dewy young Brits with jangly guitars. The details are so spot-on: the moment after the second verse when Max Cooke sings "never again...now" (1:47), the ping ponging noise you hear after the 2nd chorus (2:20), and the horns that lead into the cacophonous ending.


Their debut album is finally ready - it's out on July 30. I'm glad they took their time. It's called Control and here is the tracklist: Beautiful To Watch / The Illness / Passchendaele / The Curse Of Saul /Alice / Good Life Salesman / Violent Man Lovesong / The Last Day / Walk With Me (new version) / Leni / Turn It Back (new version) / Start/Stop

Not as immediate as their look would suggest their music would be.

Nevertheless, the Blonde in the red T-shirt is mine!

i'm very ready for some proper good indie jangly tunes from proper good bands. the lack of it is affecting my vocabulary. In unrelated news, your response to the article on blogs on dirrrtypop was inspired and genius. I choked on darren's crumpet when you mentioned people occassionally using fake press credentials. HAHAHAHAHAHAHAHAHAHA

I forgot to mention bloggers whose posts consist solely of rejigged press releases, day after day.

More power to them, but it's not really what I'd call blogging. It's marketing.