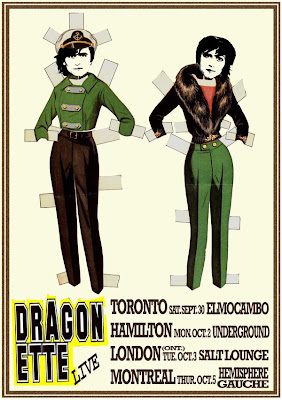 I've got to make you understand, Dragonette's forthcoming single Take It Like A Man is one of the fiercest pop songs of the year. It will surely slay less hearty pop tunes in battle. For several weeks now, I've been running all over La District, occasionally featuring appropriately disheveled hair and clothes, singing this bitchin' tune on my Pod.

Check out the Popjustice post on Take It Like A Man. The pornolicious video is also one of the best I've seen all year; lead singer Martine has STAR written all over her ass. More on that soon.

Everybody's nipples have gone pointy over Dragonette's artwork, though I actually prefer their retro show posters... 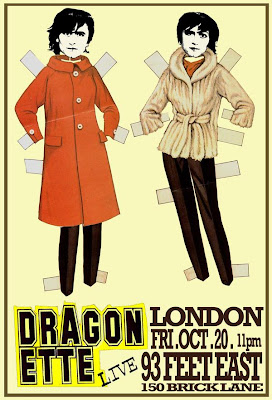 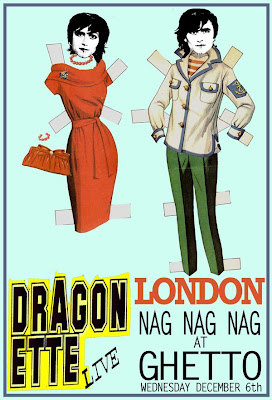 AND I love the vocals/lyrics on the gorge middle eight:

I want you for the cause
How does anybody get anything done?
You depend on us
You’ll never get to heaven as a radical son

Don’t be running off
Because this is love
What did you think it was?
Oh I think it’s love, love
So don’t go!

Here is Dragonette's official website...which totally does not work on my Commodore 64. Stream the song at D's myspace.
Posted by xolondon

Dragonette's album has totally blown me away. i love it. And you are right - the retro artwork is way more nipple pointly than their cd covers. I just want to braid her hair...

I have yet to hear Dragonette's album, but when I found out their singer was the girl in that amazing Basement Jaxx song/video for "Take me Back to Your House", I had to check them out. Their songs are refreshing in a Gwen-meets-No Doubt sort of way, and the new video is KILLER! Thanks XO! Can't wait for the album now...