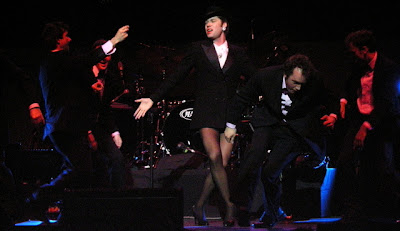 If you read Tricky and Wongie, which you should, you'll know that Rufus Wainwright had a surprise finale for his Sunday night show at The Old Vic in London. He lipsynced to his own performance of Judy Garland's Get Happy dressed as Judy Garland. How Victor/Victoria. Rufus didn't do this during his real Garland performances over the past 8 months, but his own tour is apparently a looser affair.

When I talked to the rebel prince for the June issue of Instinct Magazine, I asked him about the rumor that his Garland shows pissed off her equally legendary daughter, Liza (With A Z!) Minelli. Here is what he said:

She didn’t approve of it from the beginning and I think that the main thing is…[pauses] I would assume that she’s not angry, but disagrees because she’s spent so much of her life separating herself from her mother, and has done so quite successfully —which his tough when your mother is a legend. I think she also found me a little bit too panting for her approval. My father used to know her when he was a kid. They grew up together, and when I met her, I kind of sprang that on her and she kind of jumped back. So I think that kind of set the scene of me trying to kind of devour her Garlandness. But you know she did make a mistake, because it was a great show and she’ll come around.

Read my full Rufus interview online at Instinct! Note that the online version has exclusive bonus content which is a bit more music-oriented.

Check out the Get Happy video courtesy of Wongie and moneboh on Youtube:

Meanwhile, Rufus has been experiencing a minor and amusing backlash. Don't take it too seriously. Check out this post from Stereogum, who call him "the most debauched, celeb name-dropping man-about-town we know" and The Independent,which has this quote about Rufus's boyfriend Jorn: "He is a physical marvel - which I rather require in my men - and the sex is fabulous."

Coming soon, some final "exclusive" bits from the interview that have not been seen yet...

[cue round of applause]

Those people at Instinct should get you to do more stuff.

I wish he had been more specific about his PSB remix remark, but I get the impression the answer was basically "not on your nelly".

Awesome all around. The article is great, and thanks for passing along that clip!

Viva Rufus!
XO, you are so fantastic! Maybe I am crazy but I just call to say I love you! Blush

Superb xo, an excellent read. Thank you for the Liza!!

Thanks a lot for posting both the interview and the YouTube clip. Seeing Rufus prancing around as Judy has made my week. :-)

Just posted this up on my blog, and I give props to you for discovering this gem!