If you like to read my blog, you are luckyloos this week, because I am off for a break and will have lots and lots of posts. Tons, like I have no life! 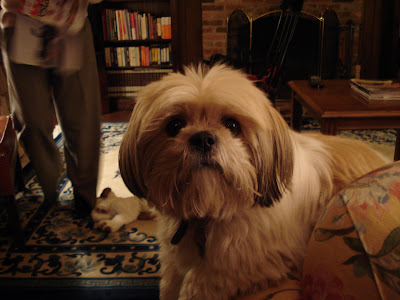 ...but I do have a little bit of a life and welcomed what I consider to be my first weekend of summer. It was beautiful 70's weather here on Saturday and I was outside much of the day, eating under the trees at cafes in parts of town I don't usually hang, so I felt like I was on vacation. There are no pics of the great day, so instead I'm posting a pic of Cassie My Dog Sister. My parents sent me this last week. I am well obsessed with Cassie...

Anyway, here also is a list of tunes I am rockin' right now... I tried to categorize them but it was too hard (is this rock, indie or pop?).


Dragonette Competition / Take It Like A Man
Two gorge guitar pop songs by this Canadian band. I love lead singer Martine's empowered sex prowling persona. On Competition, she is the Other Woman ("goodness I like this, being your mistress!") and the bossy Take It Like A Man has multiple layers of meaning. The album is out this July and it should be smokin' hawt.
Hear both on myspace.

Maroon 5 Better That We Break
You may have seen Paul De Zappin talking to Adam Levine about how wonderful this breakup ballad is. A fine studio sheen does nothing to disrupt this insta-classic because nothing can fuck with skinny-mini Adam's voice. And yes, you'd better get used to this tune, because you're going to hear it for the next two years on radio. And if you ever spend the night with Adam, you'll probably hear these words straight from the horse(-hung)'s mouth the next morning. He'll love you and leave you.
Get it via iTunes US (as of 5/22) or hypemachine.

Natasha Bedingfeld Say It Again
Did Adam Levine bed Natasha when they recorded this song? We'll never know, but if life were an episode of Entourage, he did and it was very sunny and Californian in a huge kingsize bed with expensive sheets. But I digress! This is essentially an M5 song with "NB's" vocals laid on top. She should do more of this music. And listen for bony/boner Adam warbling at the end.
Get it via iTunes UK - it is due in America later this summer.

Roderlin Wake Up
First we had The Rosebuds carrying the indie New Order flag and now we have the Swedish group Ronderlin. You can read a better assessment of this fine pop tune at Tremble Clef, who continues to bring music to the englightened masses. And you may be able to get the song too). PS: Be sure to read the "wuvstruck" post about the Vietnamese travel guide.
Get it via itunes or hypemachine.

The National Fake Empire
Not an English band, they are Ohioans from Cincinatti! The vocalist has a deep-voiced Leonard Cohen quality and the song has a great mix of accessibility and dissonance (you'll get that about halfway in). It's a real grower and the ending is very Sufjan. Their new album is called The Boxer and is out this week.
Get it via itunes UK or hypemachine.

Laura Michelle Kelly Jesus Was A Crossmaker
I am well-obsessed with LMK's new songs, this one in particular. This is a Hollies cover, but her reading sounds like an Elton song from the 70's Honky Chateau record. It's sublime and no, it's not a religious song, pop followers.
Get it via google blog.

Pink Martini Hey Eugene
Thanks to Worrapolava for this one, from their new album of the same name. It is not a novelty song, it is a narrative and based on a true story by singer China Forbes, who appeared on NPR this week. It's absolutely delightful and a total earworm. Forbes said that the end of the song is based on TV show themes of the 70's, particularly The Jeffersons, which you can hear in the soul ladies vocals.
Get it via itunes US or hypemachine.

Ryan Adams Two
The enigmatic Ryan is streaming this lovely new song on his myspace. He is such a throwback to the great 70's singer-songwriters. If this were 1975, he would have had affairs with Carly Simon and Stevie Nicks. In fact, half of Carly's songs could easily be about Ryan, given his personality. This is from his new CD Easy Tiger. How many of you have had someone say that phrase to you? I have (but not in the way that sounds).
Get it via hypemachine.


PS: Mom and Dad sent me a pic of our homemade Easter desserts, which I have added to this post.
Posted by xolondon

I think I need you to disappear to a summery café with your laptop, sit beneath DC trees, order a cup of darjeeling and do that 'as if it were 1997' post you mused about a while ago.

And, not that I making a shopping list for you, but also enlarge on what you alluded to the other day on your La Bex review: the best pop albums of the last couple of years that gave you hope the music scene wasn't disappearing into a Arctic-Monkeys-shaped grunge-pit.

I agree with Tricky. I really enjoy your insight into what makes a good pop record, and would be curious to see a few others you would also elevate to classic status. I am curious to know other places our tastes intersect.

great selection of songs. I love the nats beds song which is good cos i generally don't like her. I also adore the sophie ellis feeling song too, which is also good cos i generally DO like her... LauraMK songs make me yearn for a new album of material and also make me want to listen to the west end version she sings of supercalifragilisticexpialidocious. What a strange world i live in

thanks for the pink martini-link! I just got their album this week and it is rather nice indeed.

I've been reading your blog for some time and discovered some great music through you. Thanks!

Yay, The National! I have bought a smattering of them today from across the albums and am mostly wishing I could just be greedy and nab them all. Thanks for the intro to them.

I am pondering the post on old school tunes. We'll see...