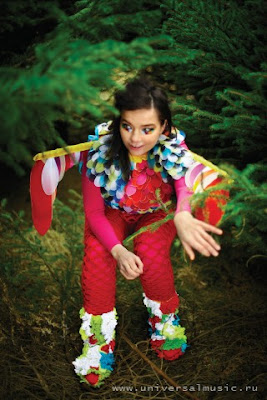 Bjork has been a favorite of mine for 20 years, but she has rarely created albums that I love all the way through. There is always something too too for me on each record, but I've always found (bar her Drawing Restraint film soundtrack) something to swoon over. I disliked Volta from the start and have only just begun to give it a chance. It’s possible that the album is a true grower and that I will come back in a year saying “brilliant,” but I have to question those who heard this once and screamed “epic!” That’s the age-old wishful thinking of fans in need of something great from an artist they love. Especially one who has been wandering in the Forest Of No Hooks for five years.

So why have I not warmed to Volta? Could it be that there is too much competition in pop? That I have lowered my standard and would rawwwther listen to a nice 3-minute song built on hooks? That I am no longer worthy to hear the Art?

Or could it be that I cannot even open the damned Volta packaging? It took me ages to get the booklet out, it is wedged so tightly. I wisely chose to put that Bjork-as-glass-fruit album sticker on the side panel or it would have been destroyed. Maybe she knows CDs don't get played more than once, because we load them to our computers? Whatever, the packaging is a pain in the ass.

Earth Intruders is a decent single, but not her best. It would have been accepted in the indie pop culture regardless of the Timbaland affiliation because it’s loud and insistent and therefore more authentic by rock standards. It’s her version of a guitar track, but in many was she has mined this territory before on the epic Army Of Me. When it leaked in April, this song was an easy way for everyone to declare the album a potential masterpiece because they hoped it would be.

Anyone buying Volta on the strength of that song will get... Innocence, which is a "Earth Intruders Part Two,” not to mention a rip from Big Time Sensuality. You keep waiting for her to sing “it takes courage to enjoy it.” Courage is not required for this album, just patience.

Can you imagine the Timba fans cranking I See Who You Are or dealing with guest vocalist Antony Hegarty’s voice? It’s amusing and righteous for Bjork to throw those angles at them, but listen to what she does with Earth Intruders on the album version: where the song should end at about 4:30, she tacks on a minute and thirty seconds of foghorns and sound affects. Huh? Does this add to the theme? What is the theme? I though it was going to be martial thang.

I don't know if Volta is any more or less indulgent than her recent work - maybe I am the one that has changed. All I know is that it lacks a certain oomph, which probably has to do with melody and self-editing. The stately Dull Flame Of Desire is a good example of a track that just needs a new mix. The song starts promisingly as a duet with Antony, and it does develop, a la Unison, with beautiful horns and, finally, some beats. Still, it takes too long. She could have shaved a minute off the vocals and perfected the song.

Wanderlust is the most Bjorkian of the Volta songs. It sounds much like my favorite album, Homogenic. Everything works in unison here, the wailing Bjork vocal, the ominous synths beneath the song, the ticky tackety beats, and the horns that wail across the top of it. The song builds for about 5 minutes until, in the best Bjork style, all the elements come together.

Vertebra by Vertebrae, on the other hand, has no melody at all. It brings back the horns in menacing stabs – “like old train sounds,” she sings in the lyrics - but it’s all style, no content. For 4 minutes, the song meanders around its verses. When is the chorus coming? It never does come, but the song is not interesting enough to sustain this endless foreplay. It's like a long interlude.

In one sense, Bjork’s own legend is a problem. Fans like me expect her to reinvent the wheel each time out and, to be fair to her fans, she plays to that, announcing the blueprint for each album: little strings/big sounds, songs recorded on laptap under the kitchen table, no instruments. It’s like a one-sentence movie pitch: Volta: must go around the world assembling songs piece by piece. She has no restrictions now; in her own way, she is a classic archetype: the megastar drowning in too many options.

I also feel like the album was rushed, which seems odd given how long it took her to make. Recent press pieces suggested she was still recording this winter and, for me, it’s still not done. It needs one or two more corkers, as opposed to a wilted ending like the incomplete My Juvenile.

If horns are meant to create the antidote for Volta’s marching songs, they never quite go where I want them to... to a big gorgeous place! They come closest in the second half of The Dull Flame Of Desire, if you make it that far. They also work well on the pretty, if gauzy, Pneumonia. The lyrics, set against a cathedral-like swell of horns, are classically Bjork: straightforward and inspiring: “All the moments you should have embraced, all the moments you should have not locked up… to shut yourself up would be the hugest crime of them all.”

Declare Independence is also a rouser – a classic album track that will polarize fans. It’s her take on a Patti Smith protest song (“damned colonists!”) mixed with Nine Inch Nails backing. Others will hear her, under layers of distortion screeching, “raise your flaaaag!!!” in her dotty Icelandic accent and just laugh. But this is Bjork of yore: notice how the horns reappear in either brief, elegant stabs or as a train horn coming toward you. The song is fucking bonkers and it works.

When I started this review I disliked the album and now I am prepared to say it’s a missed opportunity. Not a disaster, but more of a curiosity than I would have liked. Bjork is not the go-to person for instant pleasure, but it's not setting too high standard to say her records should take you to the heavens and gently bring you down again. Volta just kind of drags you around the world by the pantleg.
Posted by xolondon

Excellent review! I’m not a crazed Bjork fan. Album is fair, no doubt worst Bjork stuff ever.
Dull Flame Of Desire, Earth Intruders, Vertebra by Vertebrae are good songs. I have no problem with Declare Independence but this song is looks like Nine Inch Nails.

Very insightful XO. I am too of the Bjork school of worship, and when critics began to poohpooh around the time of Vespertine, I fell in love with that album. Medulla seemed a bit distant and indulgent, but there was much there to like, and I feel the same about Volta. It seems incredibly transitional to me in the way that it was described as "her most varied collection to date", when they should have said "her most scattered collection to date". Volta does have a feeling of being tossed off in spots, while other places seem very purposeful. My favorites are in the first half of the album as well, although I quite like Pneumonia and Declare Independence as well.

I think the problem is that she herself doesn't seem quite sure where to go from Medulla. All this time off with the artist husband and having children (as well as recording the unlistenable Drawing Restraint) have pushed her even further from what people found endearing about her in the first place, and now it seems like she is struggling to find her way back to edgy pixiedom. Volta is a very transitional album for me too, yet a good one at that (if you are down for her quirky sort of thing). Antony's voice is a nice foil to hers, although that song ("Dull Flame") does go on a bit too long, and the foghorns on "Earth Intruders" seem like a way to deter downloaders and a simultaneous mood creator as well.

She is still bringing in sales (craziest album to reach #9 ever???), and selling out shows. How long people will suffer the wackiness for the lack of tunes is anyone's guess, but she would be well served relistening to "Venus as a Boy", "Bachelorette", or even "Birthday" to remind herself why people loved her in the first place.

And the sticker combined with the stuffed booklet may be the worst packaging decision ever. (Soon after the release, I was issued a memo from the label that said they were RAISING the price $1 to a SRP of $19.99. Apparantly they figured it would be more expensive to reproduce the stickers in the future, so maybe this is now considered "limited" packaging--hopefully).

I couldn't even review it. I withdrew my pre-order after I heard it as I just was not bothered and knew I would only burn a couple of the tracks onto my iPod. I have been a fan since The Sugarcubes but this album and the weird Drawing Restraint thing have just irritated me. Like you said, some of the trakcs have no melody... and she's too old for the angry punk thing.

The tracks I have kept are Earth Intruders, Dull Flame Of Desire (even though it goes all horrible) and Innocence (the only one I truly love). I'd much rather listen to new CDs by Siobhan Donaghy, Jill Cunniff, Manic Street Preachers or Chungking to be honest!

How did you get Chungking? I can't find that!

Chungking? Er... I don't like to menion bit torrent sites that sound like the noise a pig makes...