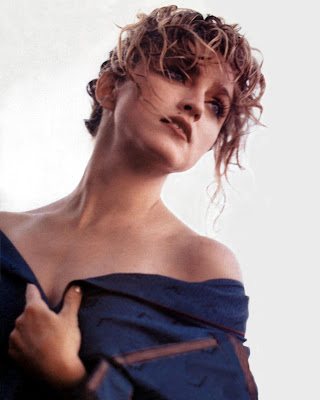 Tonight Justine Timberod* was interviewed on Access Hollywood. He said that he'd done 5 or 6 tracks with Madonna - some complete, some not - and that they plan to record again in July. Seems to me it's more likely a 2008 record... ??

Like that pretty picture? It's by Herb Ritts from 1985, taken in Hawaii for her Virgin Tour programme.

Looks like we're "probably" getting The Re-Invention Tour on DVD finally this year to mark M's 25 years in the biz. That'll do for me till 2008. More than happy waiting around till then if that's what we'll get in between.

Madonna works quickly though. She doesn't hang around so I expect it new material in late autumn. Just in time for the Christmas goldrush.

I remember the Confessions album was at this stage 18 months ago and she had it out and well under way for Christmas.

I'm with Phil...Let's hope we have a new album this year!

I'm very intrigued as to what the "new sound" will be like. Not real thrilled with her collaborators right now, but I'm reserving judgment until later. :)

If Madge is going to work with current, "hot" talent, why not go for the gold and pair up with someone universally loved... someone with great artistry... you know, like Fergie!

If not for this year, why the big work ethic now? The two don't tally.

I concur that July is leaving it *very* late for a November release though, but as Phil points out, CoAD was made on the same timeline.

You London Madonna Fans are very hopeful lads. It IS possible, it's just tight. If they meet in July and start doing new stuff, it just seems like its cutting it close for an artist with her level of worldwide mega-marketing. Where's the fire, other than you wanting to hear it? She usually waffles between Fall and Spring releases anyway.

Having said that, she had a one month delay last time (horse) and managed to get the record out.

PS: Kylie Minogue will distract you Tricky Richard, that I promise you.

I'm wanting to know [many] more details about that but everything has gone suspiciously quiet. Do you know what's going on? I am awaiting a kickass pop album that won't even try to be fashionable but will inadvertently re-set what it means to be cool in 2007 so fast that Madge will sprint screeching back to the studio to make the point.

I drove past our Kylie's house at the weekend but there was no point in popping in for tea and a scone, I gather she's in South America.

There is something very, very wrong about me squeeling with delight at J'ason and his suggestion of Fergie & Esther working together, isn't there? Forget Justin, Fergie-Ferg give ya lovin' long time!

I only suggested her because Ashley Tisdale is probably really busy with HSM2... I guess there's always Hoku..?