La Bex is back 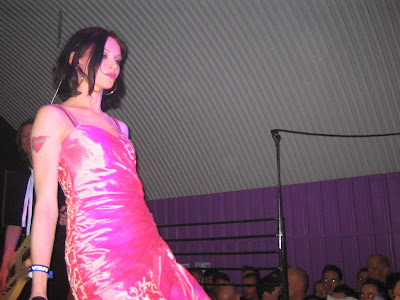 Sophie Ellis Bextor has been bounding around Europa doing interviews and performing her new single, the 1999-ish Me And My Imagination. Along the way she's said some amusing things:

2) Her husband Richard Feeling was mighty pissed about Soph's technical glitches on her New Year's Eve TV performance of Catch You (watch in horror!):"Richard went up to the sound man, who just shrugged. Richard was so angry he threw his drink over him." Good gravy Marie, I say.

3) Sophie tells The Independent about the drama of childbirth: But during pregnancy she was rushed to hospital with pre-eclampsia; her son, Sonny, was delivered eight weeks early. He was in intensive care for five weeks; later, at four months he was re-admitted with meningitis. "It was just so scary, I don't like to think about it," she has said.

4) About baby Sonny's dandy-ish clothing, she says "What's the point of having them if you can't dress them up in cute outfits?" Love her. No preciousness there.

5) That's La Bex above on May 6 at London's Area. She has this to say about dancing in London's gay clubs (Rebel, Rebel and Ghetto Club): "Once when I went there they played 'Murder on the Dancefloor' and I was standing in the middle and everyone was singing it to me with these great happy faces. It felt like I was surrounded by lots of new friends. It was just like the end of a film when the credits are rolling."

6) She loves her new album cover even if her fans decidely do not. (ed: it's dull)

Finally, watch Sophie speak for like 7 seconds about her new single. Strangely the song is only available on Napster UK for now, with a release next week. But why bother, when the album is finally out May 21? For more on La Bex, click on the tag below.

Photo courtesy of fan JP on Soph's board.
Posted by xolondon

The album cover ain't all THAT bad. It's just not great.

You are the only person to comment! this does not bode well for SEB!