I too am a pupil of Ghosts 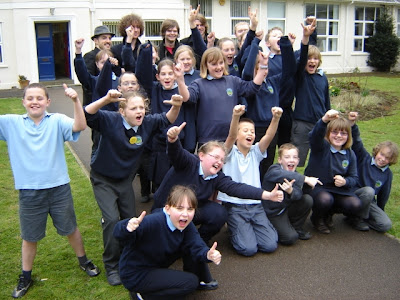 I do not like the tea I am drinking. I just wanted to start with that erudite comment. It is White Earl Grey and it has no taste. Onward...

Ghosts have announced their debut album The World Is Outside - also the name of their poppy new single. It's due out on June 11 and was produced by Danton Supple who has done, like, everything. For those who need to know lead singer names, he is Simon Pettigrew. Anglophiles should note that the band is originally from Cranleigh in Surrey.

About the picture above, I kid you not, but Ghosts is the "class band" of the Year 6 students at St. Mary's Primary School in Timsbury, near Bath. Ghosts website says that the students "follow our progress over the course of this year, doing various projects based on us (reviewing our songs, creating Ghosts artwork, and so on). We decided, since we were going so close to the school on our way to Bath, it would be rude not to make at least a flying visit to say hello."

Errr, why didn't I go to that school? I would have been valedictorian! (Right Jim?) Last year's band was Magic Numbers.

The new single is boppy, but does not have the urgency of their perfect #1-in-an-alternate-world, Stay The Night (video). You can see a live perfomance of The World Is Outside here.

The album tracklisting is: Stay The Night, Musical Chairs, The World Is Outside, Ghosts, Something Hilarious, Mind Games, Over-Analysis, Further and Further Away, Wrapped Up In Little Stars and Temporary.

Ghosts myspace page is loaded with goodies - you can see the album cover (dull, with yellow boomerang thingies) and hear the moody new song Temporary (superior to the single in numerous ways, especially the tinkly-yet-raging last minute).

You can also get an exclusive download (.m4a) of new album track Over-Analysis! I don't think it's their best track, but I'll take (legal) free music any old day... Click for more details

Fans of unabashed British poprock like Keane, The Upper Room, Captain, etc should take note. I really hope Ghosts do well. Stay The Night brings me back to life every time I hear it.
Posted by xolondon

i AM eager to hear more from them, i belatedly got into the first single and love their cover of Don't Cha, but you always jinx bands :P So i'm scared for their longevity :)

...but Paul! Captain are back, back, back! (June the 5th at the arty farty ICA on Pall Mall, Londinium). And they've been given a reprise with a second album. Maybe the 'jinx' is wearing off!

Oh, yeah, this was the band I was asking in your recent post -- who were we into last month. Thanks for not getting back to me, bitch.

Oh, wait... I guess you kinda did with this post. Yay! What a good friend you are!

the curse is lifted?! Hurrah!!

Thanks XO... I likey these Ghost-es!

You are always so good to hook us up to great new muzik!

I noticed that Captain may release a new non-LP single. Didn't realize about the album. If you like Captain be sure to try Mr. Hudson and The Library.