When we talk about Love 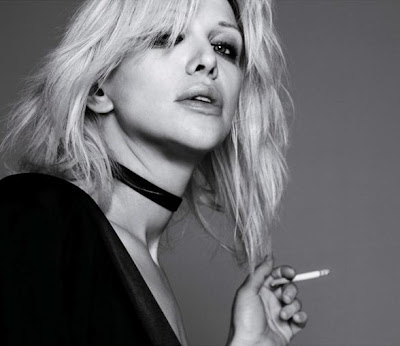 Courtney Love gave an interview to National Public Radio's Neda Ulaby this week. The piece is called Rebuilding Courtney Love, One Song at a Time [click on the title and there is a link to play it]. Ulaby talked to both Courtney and Linda Perry about making C-Love's new record Nobody's Daughter, previously titled How Dirty Girls Get Clean.

As per usual, there is cockeyed wisdom, humor and delusion - and it's laden with the word fuck, which is amusing for NPR. Courtney makes a good point, however, about sexism and her own vilification:

I haven't done half of what these guys have done... how come I'm a bigger badass than Pete Doherty? Who hasn't left us a song? If he died tomorrow, nobody would know his songs...and (he) sits around and shoots blood syringes and needles at cameras? Yeah, okay, I've gotten in a few fist fights. I don't know anyone in this business who hasn't, you know? But oh, I get charged with them because I'm a female and females aren't supposed to hit each other... I've been arrested on two airplanes for saying the word fuck.

There's truth in that, especially about Doherty, although she leaves out such flamethrowing as the time in 2004 when she had some strange dude sucking on her tit for the paparazzi outside a Manhattan McDonald's. I always think of Courtney as someone you might enjoy being around, but in small doses.

Regarding her recent weight changes, she says this:

I've been on these shakes... I don't eat, cause food is for peasants. Because I'm 41, is anyone gonna give me shit about me still rocking? Not if I'm thin enough. Isn't that a funny answer? I tried explaining that to my daughter and she was like, You're sick. She says, The culture you ascribe to is so disgusting mother!

She tells these stories about her daughter, I think, because she's proud of them, amused by them and it serves her well publically for people to know that there is someone calling her on her behavior. Linda Perry is the same type, pushing Courtney because she believes in her.

You can hear them rehearsing what may be the first single, Samantha. Courtney's trying to create her own Roxanne or Rhiannon! This is going to be one of the most watched/waited for albums of the year.
Posted by xolondon

Food is for peasants? She is quite literally amazing. I am probably more excited about this album than the new Girls Aloud one.

i rather think this picture of Courtney is rather intruiging and lovely...

she's got that certain something about her. even her incredibly terrible pictures absolutely captivate me.

This whore's album better not suck like the last one did.

A bit more "Boys On The Radio" and less "America's Sweetheart," please.