Scream if you wanna go faster 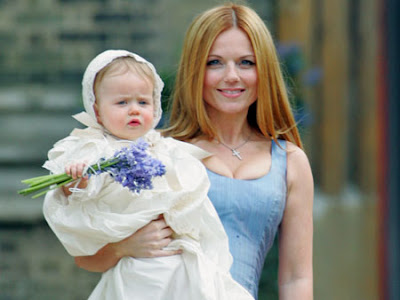 What a beautiful spring weekend. As you may have guessed, I just walked in from the christening of Bluebell Halliwell. I held Harry The Shih Tzu during the ceremony, while that bitch Posh ate laxatives in the back row...

Bitchin' Gwen's new video for 4 In The Morning? Sophie Muller and Gwen are kind of running out of steam. The video treatment for this one seems to be "Dude! What blond looks can I do that I have not, like, already done?"

Chartrigger's tête-à-tête (exclusif!) with Dan Gillespie Sells of The Feeling: Did you notice the piece of massive news about Trevor Horn in that piece? Pay attention pop fans! I hope someone in their camp has the good sense to link that interview on The Feeling's blog. PS: D'luv did forget to ask DGS how aflutter he was meeting me, "XOlondon", in October. Maybe next time.

Tori Amos. Well, it's too soon to leap on the shit or genius bandwagon, but it's clear: 1) that caravan is too damn long and 2) the album cover is absolutely shiteous. That said, Teenage Hustling is pretty kickass, as is Secret Spell.

Casey Stratton's song Rising Sun (at iTunes) has some beautiful producton - the intro is gorge. Tori fans should listen! The lyric is a wee bit clunky, but refreshingly straightforward at the same time. Thanks Dan for the review.

Tracey Thorn answers reader questions here and here at Arjanwrites. She's much more earthy in the press this time around. Her album is so worthy of review, of course, but I can't think of what to say yet. Buy it though!

Fans. Crazy fans of musicians (eg: Janet), stay away. One reason I don't really want the hit count on this blog to get too big (not that it is) is the attention of humorless fans who lack any shades of grey. I will never be the type of person who loves every song an artist does or calls each new album "the best!" This is not directed at any recent comments - in my email, I see comments from people on posts that are 2 years old.

My ears bleed when I hear the new Kelly Clarkson song. Screeching noise.

Did you see Bjork on SNL? I won't bother to link since the NBC Royal Militia will block the youtube video soon. Earth Intruders was even more tribal, but with gorgeous horns. Wanderlust sounded really good, like Venus As A Boy mixed with the crunchy bits of Joga. And the barefoot Bjork looked very... normal.

Remember Goldfrapp? The band that blew off America and kicked me off their message board for calling a kid jailbait after he posted semi-nude photos of himself on the board? (I was being mean apparently, which is a violation there, because Alison Goldfrapp sets such a gold standard for sweetness!) Anyway, I don't believe for one hot minute that Goldfrapp and Kylie are teaming up.

Titney. What to believe, what to not believe? It seems as if she's still not back with the people who want her healthy, but we don't know the full story, do we? Somebody needs to move her to NYC or Europe for awhile. Get her outta Hollywood and take her some place that will, errr, educate her.

The new Chantal Krezviuak song All I Can Do sounds just like Keane! Except not sung by Tom Chaplin. The jury is out on this one, but it is a bit of a grower. Suggestion to CK: Rearrange your myspace so that the enormous merch ad is not the first thing you see. It's a bit tacky. I say that with love.

I am still recovering from the perfectness of this childhood photo of Tricky Richard. Such a continental child. Everything is right - the zippy suit, the shoes, the location, the pose.

Does the sudden death of Pulp Magazine signal the slowly fading impact of print media or the barely beating pulse of pop music? Probably a little of both- plus, the generation that magazine was marketed toward does not read magazines. It may still be possible to launch a mag aimed at an older audience. You know, people who read big swatches of text.
Posted by xolondon

I'm glad to know that I'm not alone in my disapproval of that Kelly Clarkson song. Admittedly, I liked most of Breakaway, but that song is just nails on the chalkboard for me.

Hey XO! LOVED Bjork on SNL--wasn't she great? Can't believe she's been doing this nigh 20 years! Tori's CD has me a bit concerned--doesn't really sound like the comeback I've hoped for. I am liking what I've heard from the new Erasure though...

What new Kelly Clarkson song?! or do I want to know?

Curious to hear more of your thoughts for Titney's comeback album, because if she brings something less - well, let's not have her go THERE.

I am tempted to mail you my 1979 family album: there is much more velour where that came from.

The Kylie/Frapp thing sounds like a crock of shit. I think they would be a very odd fit. I am however now officially seriously impatient to hear this music.

Hey, thanks for the mention... and the new Kelly Clarkson BITES it, but there's a decent radio mix out there, the mixer's name escaping me at the moment...

"I see comments from people on posts that are 2 years old." - hahaha I had to re-read that one!

Pulp music mag: it's the weekly celeb mag which killed off this newbie. Apparently, teens are reading/buying mags, namely mags like Heat, Reveal, Closer etc. And their circulation figures are IMMENSE. Pulp budgeted for 60,000 readers and got only 9,000!

haha, that Chantel Kreviazuk song is kinda old, but i live in canada n shes all over the place here so wut do i know, but u should get her "Under These Rocks & Stones" album, its a mix of Tori Amos and Old Sheryl Crow. I like it very much :D

I adore Geri Halliwell. She looks quite nice in that picture, so thanks for sharing,

I am trying SO hard to not pass judgement on the album, before hearing it. But concept albums frighten me.

Is Kylie's album going to be a duets album? Rumors abound about team-ups with Madge, Danni, Timberlake, Timbaland, and now Ali GF, who allegedly loves to slag off Kylie in interviews. I hope the album is a country album. Produced by Willie Nelson!

And Bjork was fierce on SNL. Kooky... but fierce... it's her stock in trade!

...I too haven't been able to give a proper review of TT's Out of the Woods. I don't think I've, since acquiring the promo, have stopped letting it creep into my daily existence.

D'ya think we'll get a second single out of it? She's so desired by the label to simply *be tracey* that, along with not pushing a tour, will also let the release coast on fans alone...That being said, I hope "Raise the Roof" or "Get Around to It" gets a remix or two.