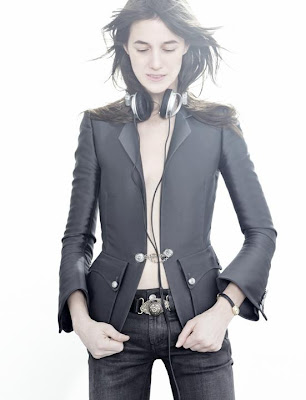 On April 29, Charlotte Gainsbourg released an expanded edition of her sublime 5:55 album in America. This version has two extra songs: 1) Fire is a previous b-side that is better than many of the album tracks and 2) Somewhere Between Walking And Sleeping is actually an alternate version of the pretty song Neil Hannon sings on the new Air album.
5:55 made my Best Of album list in 2006. At the time I said, "It's the kind of record that makes you feel like stripping it all down, throwing out your material bullshit and being totally minimal." Smooth, elegant, clever, and timeless. A little black dress of a record.

The sound is organic. Many of the songs are piano based, with string and guitar accompaniment. Her vocals do have that French chanteuse-y thing happening, but Charlotte actually has an English accent. Some of you may not realize you know her from the opening moments of Madonna's What It Feels Like For A Girl.

My favorite track, The Operation, is a wicked tale of obsessive love rendered in surgical metaphors. My favorite line (at 1:40): "If I pull this off, I'll refuse the Nobel Prize / Instead I will look into your eyes." Listen for the brilliant moment at 2:22 when she says, "Here. On the cutting edge. Of science." Chills.

The first single, The Songs That We Sing, was written by Neil Hannon and features some pleasingly...buzzing strings by Beck's father. I've said it before, great songs - like great stories - have memorable opening lines: "I saw somebody who / Reminded me of you / Before you got a face / I wish that you could have stayed that way."

Other favorites include the moody title track, the delicate Beauty Mark and the unsentimental Little Monsters, an admonishment to her children about the cruelty they'll encounter among other children: "I can't hold your hand anymore... you have to stand on your own two feet."

One of my good friends always says the same thing when we go outside into grey, rainy weather: "What a perfect day!" 5:55 is for people like him.
Posted by xolondon

I went to my friend NumbFromDrugs' place the other night and we drank martinis and ate Chinese listening to this album (I think)... I remember the song about having the naughty longing's on international flights....something about her heart breaking over Saskatchewan...then we watched Twin Peaks.

OMG Jane Birkin's daughter!!! She shows up all the time on French TV.

Someone should do a masterlist of all these Anglo-French hybrids.

I love this CD, and play it almost every morning. I especially love the song about air flight with a lyric containing "Saskatchewan". Makes a nice bookend with the Air CD.