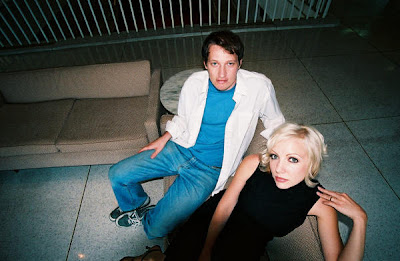 The Rosebuds did not make my list below only because their one officially released new song, Get Up Get Out (no, not a Jamelia cover!), is not my most favorite. That is reserved for Cemetery Lawns, which I played more times on my ipod. BUT this song is fantastic and I urge you all to listen to it below.

The Rosebuds (myspace) have a tremendous amount of indie hype right now, which is forcing skinny-jeaned bloggers to hold their noses and spew out the word "pop" - usually followed by the word "but" in the same sentence. Whatever. This is pop music and the best thing I can liken them to is New Order in their gorge Regret phase. There are melodies and strings zinging around, but the music is slighty more organic than "hardcore" disco pop. Just click the green arrow below and say, "Yes, XO is so right!"

The Rosebuds Get Up Get Out

I love groups with male and female vocalists, and these two are actually a couple (watch an interview). Their CD is called Night of the Furies - everything I have heard thus far is great - and it's out in America on April 10. They're on tour soon too... I may shimmy my li'l butt out on the town for that show.
Posted by xolondon

Thanks for the tip. What a great song! I had a friend who tried getting me into them after their last album, and for some reason it didn't really click, but now I think I need to give them a second listen.

I think the last one was much more lowkey indie. It didn't resonate much with me either.

I love Get Up Get Out. The 'Regret' comparison is genius. I love the male vocal, kind of fragile with a fruity accent.
That interview! Methinks they had a few Camberwell carrots beforehand. She's giggling away and he mews really quietly. hahahaha

I likey, I likey!