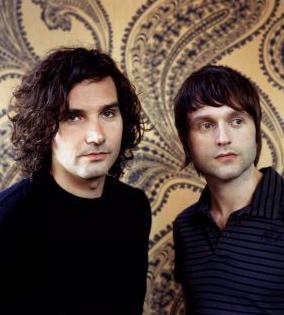 Sprung fresh from absolutely nowhere, The Hours arrive with a sterling pop-rock debut. Who are they? Where did they come from? It’s just so unexpected to find a group this good with so little buzz. [ed: That sounds more backhanded than intended!]

Being a lazy fuck, I recently wrote to Torr and said, "Who should I be paying attention to?" and he sent back a link to The Hours myspace page, telling me to listen to the gorge Back When You Were Good. I did and - in one of those crazed music fan moments - I scurried to find the full-length CD. It was released Monday in finer UK stores.

The Hours are Antony "Ant" Genn and Martin Slattery. They have a musical "pedigree" that includes working with Pulp, Elastica and the late Joe Strummer, among others. They're far from newbies and you can hear that in these 11 songs. What a joy to play a record that has been properly "cooked." The songs are loaded with moments that elicit “Oh I love this bit!” comments. Bridges slip into different tempos or beats, swooning codas and chants come and go.

Genn's lyrics are this band’s strong suit. Take this line from Love You More, a song that channels a stew of Bernard Sumner and Babybird vocalisms in its grimy verse: “I love you more than Tony Soprano / For those who do not know / that’s a fuck of a lot!” None of it is namby pamby - they have a love of the word fuck, sometimes pronounced fok and sometimes featuring the word flying added in front.

Standout tracks – there is not a duff one in the bunch – include previous single Ali In The Jungle, a passionate "empowerment" tune. If you read about Antony Genn's background, it's clear that he's of the dust-yourself-off variety. This album opener provides the first of many roaring choruses that practically taunt you to sing along: "Like Ludwig, Van - how I loved that man, well the guy went deaf and didn't give a fuck, no."

Against a syncopated beat and some nice oooh ooohs, the energetic title track describes a woman caught up in her own drama. You know the type, “...so unaware of the things she does / She reminds me of that replicant that did not know what she was.” Sounds like a single. In fact, one hopes The Hours will get a seal of approval via a diss from a jealous Noel Gallagher.

Anthemic new single Back When You Were Good is what Keane should be doing but aren’t. Just the type of song that housewives might sing - it's fucking catchy - not noticing how the lyric whips between wistfulness and resentfulness. After all, the songwriter just called his mother a cunt in The Guardian.

The piano based Icarus is redolent of most of the tracks– relatively clutter-free verses alternating with massive choruses. Ballad I Miss You is Elton-worthy and sentimental: no sarcasm in this love song.

Upper Room fans should pay attention to Murder Or Suicide – it’s the type of song they sadly never graduated to. Dig the tempo change about 4 minutes in – it’s a tease that leads you into a literally pounding 2-minute finale. Must be amazing live.

Note that the CD single of Ali In The Jungle has a shiveringly dramatic orchestral version of Ali called The Greatest Comeback. No lyrics, just flying strings. Bravo to Stop Me If You Think... for being the first to notice that song back in November 2006.

If you like bands such as Keane, Gene and Travis, I urge you to get this album. Shy yours eyes from the ill-fitting Damien Hirst skull artwork (though he did help pay for the album to be made!), there is a beautiful record inside the sleeve that is one of the most consistent and playable pop/rock albums of the past few years.
________________________________

Listen to 4 songs mentioned above at The Hours on myspace.

Read about their drug addled youth in The Guardian

Wonderful post about an amazing album. I just love it. These guys will be huge. Props to Torr for giving you a head's up on the group. Little buzz is a good thing. I like what Genn says in the Guardian article about wanting the music to arrive before the hype.

That article (i.e. their past) is so heavy, but not surprising based on the album. And his mother was abusive, so I think he gets to call her anything he likes. And I'm not saying that because I love the album. Though, yes, I really do.

yeah - amazing album by a seemingly great band. see this is how not to let vices screw up your talent, keane...