Lil' bits in the new year 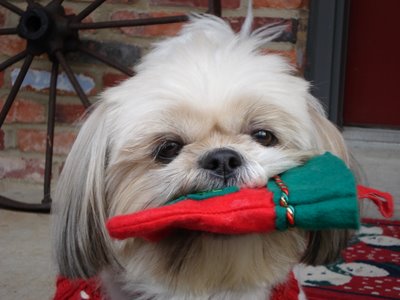 With much reluctance, I took down my Christmas tree only yesterday Another year gone by. But yes, that is Cassie My Dog Sister celebrating Christmas above (or is she a pagan?)! She has in her mouth the stocking I gave her with a special iced dog cookie in it. She would not let that stocking out of her mouth. Fortunately, she did not break into the chocolate (dangerous) and eat a foil-covered Santa like last year.

Among the music gifts I received this year were an iTunes card and the U2 book. There was one more special pop music gift which I will photograph and post about very soon. A hint: tick tock.

Just before Christmas I received a cool sliver of a gift from London: the Sarah Nixey album, which lives up to its promise - I will report on it soon. Patrick Wolf is all over the Interweb - click his name to see what I mean. The new CD is brilliant - I'll review that too. Mika leaked (ewwww!) and the results are mixed, but catchy and fun. Samuel reviewed him at Hostuff Files. What sucks? Katharine McPhee truly licks hole. Blech.

George W. Bush has lost his mind. He's running scared / clueless and it shows. This is not only embarrassing on the world stage, it make the US seem vulnerable. I don't know any American who thinks this surge idea is a good one. Meanwhile, I have decided that Cheney is a war criminal and shoud be tried in international court. Listen here to find out why I think this.

Location Location Location remains my favo(u)rite TV show! I DVR it every week. I love Kirstie and Phil. I'd hop a plane soon if it weren't for the exchange rate of $2.07 per British Pound at Amex.

Volver, the new Almodovar movie, is very good. Penelope Cruz is amazing in it. Expect a review soon.

New or recently discovered blogs worth your time: Aria Of Pop and Electroqueer. BTW if you write me about to me "blogrolling", don't feel bad if I don't do anything. I like to read a blog for a long time before I put it on the list at right. And yes,The Zapping has its best look yet.

Marc Almond is soon to release I Close My Eyes And Count To Ten, the Dusty Springfield song as a duet with Sarah Cracknell of Saint Etienne. His new album is called Stardom Road.

Finally, it was 71 degrees here recently. This is not good at all. This should be prime blizzard time, with mass panic as everyone runs to empty the grovery store shelves. It's too warm. Dead polar bears are rolling up on the banks of the Potomac, though there are no banks of the Potomac anymore, as DC is a now a floating city like Venice, which already sunk of course. Thank you George Bush for not believing in global warming. XO is on Team Gore! Dubya? He is going under fast. 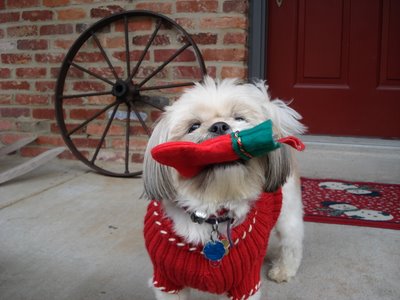 One more Cassie pic. Like the sweater? She manages to take it off every night, but we've never actually seen her doing it. Time for CCTV.
Posted by xolondon

How on earth did you get the Sarah Nixey album so fast? You must have some really great connections! SO LUCKY!!! (Sounds great from what you've been saying).

what an adorable l'il pup :) Look forward to your views on Mika! I love that album... and thanks for helping me create my best look yet!

How adorable! I bet the poor darling didn't even suspect what you'd do to it moments later with that glove...

ps ~ i have a major crush on Phil from Location :)

did we talk about Volver yet?!

Oh Yay! Thanks for the link to Electroqueer. We have been a fan of your site for quite awhile as well!