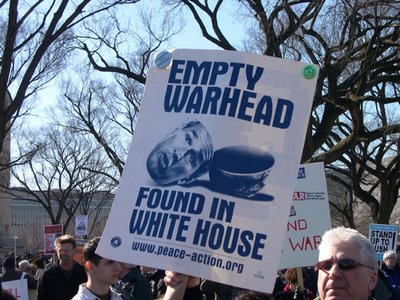 My friend Jason went to the antiwar march (while I was, err, in my house being a lazy fuck) and he took the picture above. Meanwhile my friend Jim sent me some quotes from a Norman Mailer interview at Critical Mass:

Well, the huge shock I felt when that war started was the willful blindness of people who were intelligent enough to know what they were getting into. And the idiocy of the people who didn*t know what they were getting into --like our God-fearing president. You have a country that for 30 years --leave out its tribal history, its 1300 years of religious divisions between Sunnis and Shia -- has been living under a monster. A minor monster. But what does it mean to live in a fascist dictatorship? It means that if you are interested in protecting your family, you may have to betray a friend.In other words, it's almost impossible to live in a fascist dictatorship without being filled with shame in one way or other. And if you're a person of any strength that shame is transmuted into anger. And so we are going to come in, with our blithe view, our young view, that you take democracy and inject it into a country? You liberate a country and inject it with democracy and all will be well. Whereas what they are looking for is not democracy but revenge. They are looking on life with fury. They are looking to rid themselves of shame, which they can't get by dipping their finger in a bottle of ink..

To compare Saddam Hussein to Hitler is the kind of thinking you would do in an eighth grade civics class. You can absolutely quote me on this: I really think the level of intellectuality in George Bush's mind is comparable to the mind of some mediocre teacher who instructs eighth grade pupils in civics. He's a civics teacher at a middling level, at a dreary middling level.

Awww, you are wrong doll and you should know that:

although technically it would be Frankie Say War! Hide Yourself!

Whatever, Frankie go to court and lose lots of money and have no career after.

I LOVE U!!! i tottally agree w u, n im not really looking forward to Hillary either but I think She'll be waaaaaaaaaaaaaaaay better than this shit head :p

I particularly like the comment about George W. being a bad civics teacher. That is so perfect.

Mr. XO, you take me up so high, now I never wanna come back down. I've been having a really shitty month, and as someone who works in the music industry, but I guess that's not saying a lot anymore. I run what was the largest music department of the largest book & music independent retailer on the east coast in Pennsylvania, and today, our department moved into a space 1/4 our former size. Granted, our store was a bit outmoded and suffering from too much excess space, but now, we are literally crammed wall to wall with one of the best CD selections around. Why is this happening? Because the owners of my store don't seem to care about music as much as they used to. As long as music is a commodity to be sold, greed is the bottom line, but to me, it is my livelihood, and I love what I do (as many former Tower Records employees would cite--at least they didn't completely close us). My wife and I have poured our hearts into this store for over ten years, and people treat it like its just another fact of the proliferation of downloading. I agree to an extent that we have lost lots of teen business due to the (thankful) loss of cheese-y pop, but it does suck that teens don't even see it as much of an issue when they don't support the artists and stores they DO like by actually buying a physical copy (which, lately, has many prices falling to compete with iTunes). Record companies got greedy during the late 90's, charging way too much for stuff & driving people to steal online (good for them in the long run, right?), but should hardworking retailers have to pay for others' greed? I do believe there is still a contingent of people that still love the smell of plastic and the feel of opening their favorite CD (or LP) for the first time. They are just more selective than they used to be, and that's fine. Hell, we were paying $25000 a month in rent which can now be saved for pay increases which were few and far between. It's still very sad and emotional to see everything you have worked for be tossed aside like it never really mattered.

XO, I have been working 12 hour days for the last week, trying to keep things together as much as possible, and just started taking grad school classes (in my late 30's), as well as recovering from surgery last month, so my time is incredibly limited, but your blog ALWAYS brightens my day, as you are so informative about new music, and it is almost always stuff we can agree on...not the pompous Rolling Stone stuff, not the too-hip-to-enjoy Pitchfork stuff, and not the American Idol stuff either...mostly (please exile Taylor Hicks from planet earth--and McPheever does look like a crackwhore on her CD cover). What I love are your insights into Tracey Thorn (you heard this?), Sarah Nixey, Pet Shop Boys, Brett Anderson, Rufus Wainwright, Goldfrapp, Marc Almond, Tori Amos, Kylie, and the many other artists you have cited here. Please keep writing, for you are one of the few things keeping me sane right now.

Sorry this was posted under the wrong "header", but I wanted to make sure you saw the latest posts.

Oh my God Countpopula - THAT is a blog post in itself and certianly the most heartfelt comment I have received.

I am very sorry to watch the sad, inevitable (?) decline of brick and morter record stores. It's a culture that is dying, but we were lucky to be a part of it (esp vinyl!). Now there is this new online wolrd which is intriguing too - music fans geeking out on their blogs. Postmod pen pals. The question is how do people make a living in the music business? Can the true music fans wrestle it from the money lusters? [I should pose that question to Peter Robinson at Popjustice, who is a real music geek and earns his living in the industry.]

Whatever happens, your post was very well written and really thoughtful. Thank you so, so much. If I could, I'd take you and your wife out for a margarita (or a - err - cupcake!)

PS: You must email me sometime so I have a way to contact you!

I feel bad about the downsizing of the store in Pa. and if I never visited your store, well I'm sorry too, but I haven't actually lived in Pa. for awhile. Dusty Springfield and I empathize.

About Frankie say, I haven't checked the wikipedia, but I think the reason it's say, not says, is because Frankie is an assumed plural, not a singular group. That's just a guess. Yes, that is geeker gradschoolease. I also remembering being psyched that "She bop" conjugates the verb "to bop" which is ironic considering its topic. I was in eighth grade at the time.

Thanks for the kind words. It will be an interesting struggle in a (much) smaller environment. However, I will always love music, and XO, your observations always cast a warm glow on my somewhat humdrum existence. It always excites me to know that there are other musicheads out there who go completely ga-ga as I do over certain things (by the way, the first CD we played as the christening album in our new space was Goldfrapp's SUPERNATURE--my choice).

By the way, I think the whole Mailer thing is a crystallized view of what many others have seemed to struggle putting into words. Thanks for the info--wouldn't have seen it otherwise. GOOD SHOW!