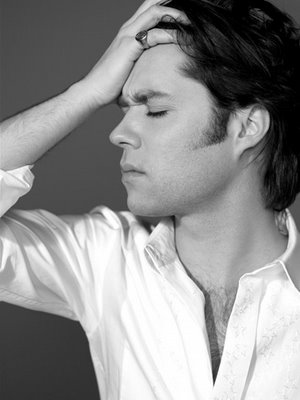 Rufus Wainwright is nearing completion (pun intended) on his new album Release The Stars. He just did an interview with Pitchfork in which he said,

I'm going to mix it in January and release it in the spring," he said. "I originally wanted it to be kind of bare, stripped down, and intimate. And it kind of became more dramatic. It's kind of huge, actually. It's kind of operatic. I produced it myself, so I went all-out a little bit."

Apparently the CD will have Joan As Police Woman and the British actress Sian Phillips guesting. Potential song titles include Tulsa and Nobody's Off the Hook.
Posted by xolondon

dazpanteloons and i may go and see his Judy show when he brings it to London in Feb :) Our first exposure to La Ruf(iepoos?)

Thanks for the heads up. For a supposed Rufus fan, I've definitely been out of the loop! Cheers!

Paul, do you own any Rufus albums?

Jeff- HI!! I hope you have a nice San Fran holiday...nothing new in Arlington.

As a longtime Rufus fan (since his first album) I'm soooooooo looking forward to this. Thanks for the "In With The Ladies."