Review: Amy Winehouse "Back To Black" 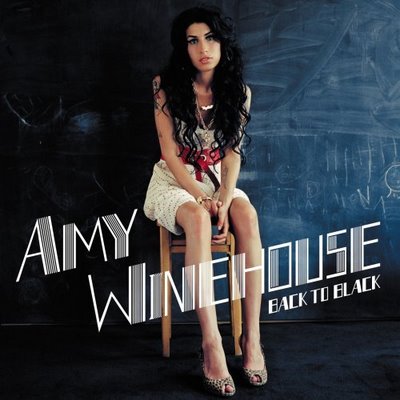 Prior to September, I knew nothing of Amy Winehouse except that she’d released a track called, cleverly, Fuck Me Pumps (watch the video). Then I heard Rehab and realized that this British/Jewish/anorexic rock chick is potentially a major new artist. Amy's new CD Back To Black is one of those "stars-aligned" efforts. So much so that when Christina Aguilera hears it, she will cry out and careen around the room, her fake boobs finally tipping her over.

Winehouse takes the listener on a very authentic tour through the history of soul music. BTB has everything a record needs: strong melodies, whipsmart lyrics, master-class singing, great arrangements and ultimately, a unique personality...fucked up and self-medicated as it may be [I’ll touch on that later].

You too have probably heard Rehab (watch the video), which may be the hookiest single this fall, with its chorus of "Tryin' to make me go to rehab, but I said No No No!" That phrase is starting to seep into popular culture. A Popjustice message board comment this week: They're trying to knock Lily Allen down, but I say No no no.

Me And Mr. Jones references the similarly-titled soul classic and features retro girl backup vocals and tootin’ horns. Just Friends, which works an early 70’s smooth vibe, depicts a woman who cannot control herself in an affair with married man (“the guilt will kill you if she don’t first”).

My first listen to the title track Back To Black (watch the video) was the moment when I realized this is one of the best albums of the year. This song is the finest Shirley Bassey moment that legend never recorded. It has such a big sound, with booming drums, chiming percussion and strings, even a bit of surf guitar. Just when you get into the sway of the song, it delivers a surprise at 2:43: a bridge that changes the tempo into an eerie dirge as Amy gives in to her darkest motions, chanting black over and over.

This album is wine soaked, pot-smoked and cheatin' obsessed. It is constant in its reference to addictive behaviors. Check out these lines from album closer, the hilarious Addicted (watch a live video):

When you smoke all my weed, man,
Ya gots ta call the green man,
So I can get mine
And you get yours

Unfortunately, Amy Winehouse appears to be imploding. At the point her artistry reaches a new peak, she seems out of control with weight issues (too thin at times), drinking, assaulting fans and - worse for her career - disastrous public performances, where she is so sloshed she cannot adequately perform. I hope she keeps this in check because, as we saw with Whitney Houston, an artist does not own their talent. They manage it. And if they fail to manage it, that talent will depart them as fast as the buzz wears off.

Whatever the truth - and it should be noted that she is only 23 - I urge to spend your hard earned money on Back To Black and buy it for all your soul-lovin' family and friends. Not since Shelby Lynne have I heard an artist doing this sort of music with such elan. Amy Winehouse, God bless her, is the real deal.
Posted by xolondon

I think this is one of those times when art comes a distant second. She's talented, but her life is more important than her career, which hardly benefits from keeping her propped up and singing while not in any condition to do so, anyway. It sounds like she's in trouble and I hope the lyrics you described don't reflect an entrenched attitude toward addiction. Also hope she's close to some caring and wise people who could help her at 23 instead of waiting...

i just don't get amy winehouse and wonder if she is one of those people, like imogen heap and patrick wolf that i should be investigating more. Seeing as i ignore her in the papers too, i know nothing about her life so it would be all music for me. Mr D'Luv! you can't go around calling people fat!! ;)

I didn't get her until Rehab came out. As for Patrick and Imogen, I'll work on that, Paulie Walnuts! I need to do a Patrick primer for people who don't know him.

Back to Amy, part of this is media putting something onto her and part of it is generated by her. I would say her art is important to her. This new record seems to be a leap in the way Coldplay made an artistic/commercial leap with their second CD. That she is doing it at 23 is amazing. We'll see if she can hold up. If you watch her on youtube, some of her live performances from late 05 early 06 are there and she is INCREDIBLY engaging and cute. Something bad happened in between then and now.

I think D'luv is being ironic about Amy being fat. He is a real tubbo you know. wink wink

I have always loved her and her music. She's in a whole different league to people like the plastic packaged airbrushed likes of Christina, Britney, Beyonce etc.

Her new album is on loop on my I-Pod. Nice one!

Check out Frank, the first album too. It's a little bit more R&B but still very good.

Man i love that line from Tears Dry On Their Own. I think its so funny. I just love that song :) AMY WINEHOUSE IS DA BEST :)!

The lyric is actually "Not fuck myself in the head with stupid men." No mention of Superman ;)

But yes, absolutely one of the best albums in years. She's an incredibly talented artist.

i've loved this woman since "frank"...
and i truly hope she gets her shit together.

all of "back to black" is perfection...
"wake up alone" has got to be my favorite track.
it just kills me... you can really feel the pain she's living with.

i caught her show at the roxy earlier this year...
and omg... was she a mess.
if not for the kick-ass dap-kings and those horns... i probably would've popped in my ipod earphones and listened to the studio renditions... whilst watching her tipsy-ass trying to get through the set.

what a hot mess...
i'm prayin for her recovery.