You put me in the magic position, darling 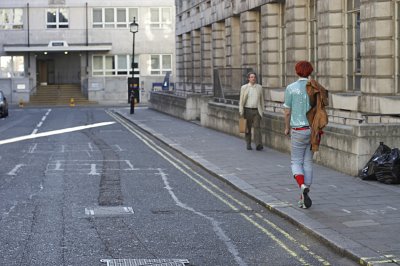 I managed to hear a very poor bootleg of the title track (studio version) of Patrick Wolf's new album, The Magic Position. On the boot, the song is being played in a club and what I could hear is fanfuckingtastic. It is actually very similar to Madonna's song True Blue, as unlikely as that seems. It has a certain 50's quality, along with some poppy fiddle that keeps climbing up in a loop on the chorus. There is also a wonderful lyrical hook: You put me in the magic position darling. Sucks ass that we have to wait until 2007 to hear this song!

Partick Wolf The Magic Position shitty recording of it playing in a club!

The picture above is taken from the Accident video shoot and captures PW perfectly. I got it from the Lycanthropy blog.
Posted by xolondon