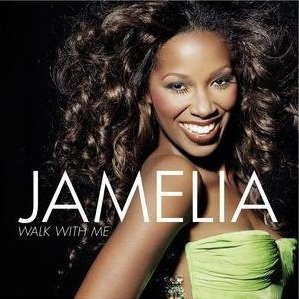 The album I've been waiting for: Beyonce didn't do it with her shouting, Justin(e) T. didn't do it with his embarrassing faux ghetto clubbin', and Xtuna certainly didn't do it with her overly padded record. Jamelia, however, soars to new heights of poptastic-ness on Walk With Me. The album is a concise 12 songs, most in the 3 minute range, and virtually no moment is wasted. The finest track, No More, is clocks at 2:53. The album bucks the current Timba-trend of reliance on beats over tunes. These songs could be played in a variety of arrangements and the producers wisely mix Jamelia's voice right up front. She sounds fantastic.

The leaked tracks everybody already knows and loves: Something About You mines Robyn on the verses and Kelly Clarkson on the chorus. It's very catchy, if a wee bit derivative. Similarly, the over-acclaimed Beware Of The Dog is reaping praise because many of the kids who like it are too young to know it's literally Personal Jesus with new lyrics (just like they thought the Rihanna track sounded like Manson, when it was built on Soft Cell). I'm more than cynical about this latest sampling craze , so I was a bit nervous about what Jamelia would do on the the rest of her CD.

I needn't have worried. I mean, this is the only POP album I know that has an appearance by Mrs. Slocombe - though she doesn't ask if we've seen her pussy - who appears on the material goodz track, Window Shopping. The nice synths on the sure-to-be-a single Know My Name sound like the 80's meeting crunk. You know I gets down too, Jamelia.

The aforementioned No More is 2:53 of anthemic wailing. If there is a God, He or She (!) will make this a single [ed note: it was not made a single!]. Jamelia walks away with her dignity and asks you to walk with her too (get it?). The fact that it sounds like it's done with a synthed-up harpsichord makes it unique, as do the wall-of-sound multi-tracked vocals.

Ain't A Love, which may be the weakest song, reminds me a bit of Sugababes with its mix of beats and a bed of swoony strings. Better is La La Love, which has a bit of an acoustic-y Craig David thing to it (at least on the verses) and an uber-catchy chorus that will make it a great 6th single. ??

Go has a retro feel and Jameila takes it to the church a bit at the end of the song. Get Up Get Out is a highlight, built on top of a strange sped-up string sample (as opposed to the usual sped-up vocal sample) that keeps coming to a choppy stop. It has a pretty melody on top that somehow mixes in some radio-friendly uh-uh-ah-uhs. The Estelle-esque final track Got It So Good works as a combo of the previous two songs: a midtempo empowerment sorta-ballad in the No Worries (by Simon Webbe) vein.

The bonus track is fantastic: Hustle will remind you of the best of Beyonce and Javine's Surrender. Sounds like a Rich Harrison thang with 70's horn-y disco and a decent rapper feature. Make space in your bedroom for an imaginary runway and strut down it to this song.

I have played this record incessantly since I - cough - found it. POP SONGS that work as a complete album that is listenable from start to finish (in a relatively short amount of time). PopJustice freaks will love it as there's grist for numerous arguments over what will or will not be the next single. I'm sorry babies, but Jamelia *brings it* without shouting in our faces.

The Jamelia album is seriously amazing. I'm one of those young 'uns that doesn't know "Personal Jesus" and loves "Beware of the Dog", but almost every track is great. Way better than her last CD, which was basically the singles and then some other barely decent stuff.

this album made me moan gently. In a good "darren" sort of way ;)

I'm a bit out of the loop on Jamelia's new one. I heard the single awhile back, but it was bad quality sound-wise.

Who knew she's get all super after "See It In A Boy's Eye"?

This album completely makes up for "Superstar."

Completely agree with E.B. Noodles - "Superstar" just rubbed me up the wrong way.

This album is ridiculously solid. Brilliance on so many levels, and yes, "No More" is exquisite.

Definitely one for the year's best of list....Every track is fantastic.