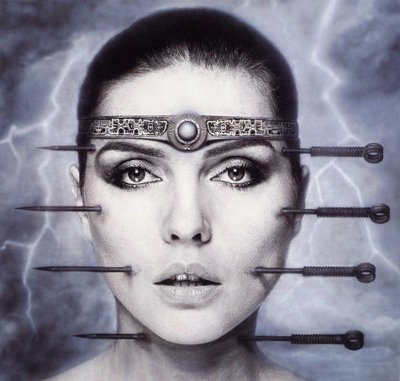 While listening to the new Kelis album - Kelis Was Here - this week, I also had need to get out my old turntable. It occurred to me there's an album that's really a template for what Kelis is now doing in the 21st century. It's also a record that most kids today will have never heard: Debbie Harry's KooKoo.

Released 25 years ago this fall, this album was way ahead of its time. Produced by Nile Rodgers between his productions of Diana Ross's Diana (the one with Upside Down ) and David Bowie's Let's Dance, it featured a scary HR Giger cover image (above): Debbie skewered by huge nails/needles through her face. No one really knew what to think of the image or what lay inside the sleeve: a fusion of rap, pop, rock and slinky Chic disco that somehow pushed ahead of Blondie's own version of that musical mash-up.

Debbie recorded the album with Chic as her backing band, along with partner Chris Stein. On the bouncey album opener Jump Jump, with typically weird lyrics, Debbie's vocal sounds so young you could almost mistake her for the not-yet-discovered Madonna. Only 2 tracks are easily available today* (via iTunes): “Backfired” and “The Jam Was Moving.” The former is straightforward rock-pop and the latter, about the "hidden power in the groove," has a wicked clicky rhythm on the chorus and slightly processed guitar.

Now I Know You Know is a lazy, gorgeous ballad that reminds me how amazing Debbie's range was. Just when you think the song is going to languish into a dull groove, it has a twist: in the 4th minute she delivers a brief spoken manifesto before the song becomes a jazzy sort of fern bar samba.

The album also includes "Whip It"-inspired rap music (Military Rap) that predates Timbaland and Missy by 15 years and Under Arrest, a pop-punk track. Surrender is what might happen if Chrissie Hynde had recorded Like A Virgin. Remember, Debbie was Madonna before Madonna was Madonna. She did it with seemingly no effort - in fact she was frequently almost louche and non-committal in her performances. She was - and is - cool, while others (including M) seek to acquire coolness. 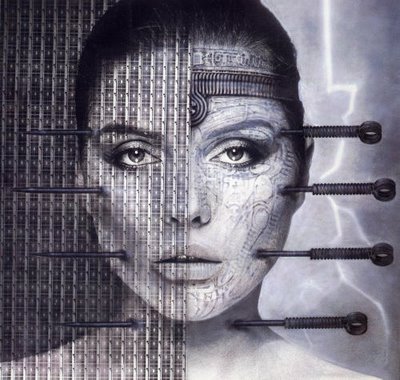 *2012 update: A remaster of KooKoo is now available via Gold Legion. It is also more widely available on iTunes.
Posted by xolondon

Deb. is trully a done-it-all woman, isn't she?

You can find more of the HR Giger imagery in her video for "Backfired" which can be found on YouTube.

I added a video link - thanks! I knew you'd go for this post... (check your email)

Even though I grew up in a country with an annual Thaipusam festival, in which Debbie could have fiercely walked, I was really freaked out by that album cover when it came out. I'm still a bit queasy now.

Teacher here with my red pen....

This album was released by DEBBIE Harry - Deborah was the name used from 'Def, Dumb and Blond' (1989)onwards, not before.

'KooKoo' was released on CD for the first time in the UK in Nov 1995 with 2 bonus 12" mixes as part of the Blondie re-issues campain the same month (I got them all for Xmas). I believe that in Australia, it was released on CD before this date.

...and furthermore, the relative failure of the album may be partly because the posters and ads were banned in the UK for being too disturbing... The name 'KooKoo' (pronounced 'queue queue') comes from the image of the 'a-Koo-puncture' on the front... this album is fuckin' nuts. She was either very brave or very stupid when she tried some of this stuff... I have a fondness for it but it's certainly NOT pop music. More art project...

thanks anfunny- I corrected a few things on the post!

The creepy/fabulous Giger-directed video for "Now I Know You Know" is on YouTube as well...but I'll be damned if I can find it now!

i bought it on vinyl the week it came out when i was a wee one. i loved backfire. just drop to a dead stop, and.... and the rap, i loved it so much!

wow, i never really payed any attention to her solo career but these tracks r really good thanx for posting

I was just about to comment that it had been released on CD... I believe Razor and Tie issued it in the states as well.

Waaay late to the party, but I'm listening to this record for the first time in twenty years, and I'm finally digging it. Dismissed it outright when I was a kid b/c it didn't sound like "Eat to the Beat".

This is an ancient post! Someone needs to remaster this CD.