The only antidote is you... 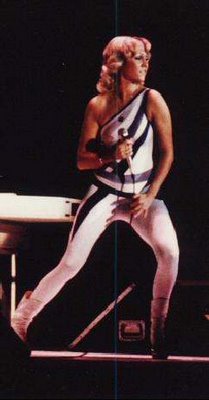 Newsy bits: Madonna, pictured above - or wait! is that Agnetha from Abba!? hmmmm...anyway, Esther Richie is going to Africa. She's been hanging out with economist Jeffrey Sachs (who XO has met!) and Bill Clinton...I desperately wanted to see Pretenders live recently, but could not afford it. Kenneth In The 212 did and reviews it. Chrissie looks great!...Rufus Wainwright is in the studio. 2007 will be his year, but until then we have a new song in a Viktor And Rolf commercial...Diana Krall is sort of a bitch but does this surprise anyone?...The Kooks get treated with disdain by c*nty Simon on Popworld...Cerys Matthews reflects, with much humor, on living in America...I am willing to admit that sometimes I get stuck on Cute Overload...is Richard Coyle of Coupling a swine?...sweet Elliott Yamin is free of 19 Recordings, which is a good thing...Rupaul meets Depeche Mode meets Zombie Prom and it's a video...Have you read Gawker Stalker this week? It's brill, as usual...Coming Saturday to XO, the return of 90's lovely Shawn Colvin...Lloyd Cole's Antidpressant get sa Sept 25 UK release date...and sorry, I will never play that Robbie Williams song again, but I will play this...

Secret: I don't like this new Rufus commercial song. String arrangement too chaotic.

It does border on being Norman Bateish. Or perhaps reeks too much of Bambi skipping through a meadow. Mostly the tune isn't very strong. But still nice to hear.

Well I met him but didn't have a conversation. MANY years ago (the 90s) he spoke one night at the school where I work and he came into the library to ask about something and I helped him. If I recall he wanted to look at a book because he had some idea before he did his speech. People at his level rarely set foot in a library, so it was a surprise.

What's weird is that he is much younger than you'd expect. This was ten years ago, so I don't think he was even 45. Not a very exciting story is it?

I wasn't really expecting a tabloid-esque report, so it's a good story :) I'd guess you're probably pretty used to seeing famous people, though, because of where you live, but that's really cool.