Hold onto your kite, just don't let me down 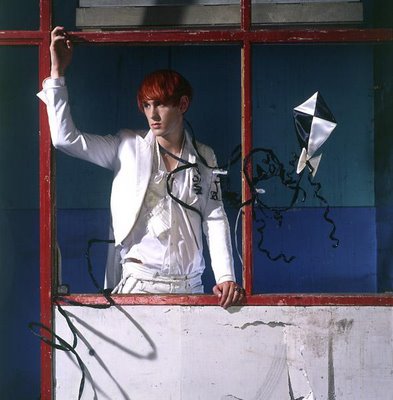 Yes, darklings, that is an official new portrait of Patrick Wolf in anticipation of his upcoming single "Accident And Emergency." As always, he brings it with the artwork.

Depeche Mode's unnecessary new hits CD (cash cow!) looks kind of ugly and has only one new track, "Martyr". Look at the mini-site for it.

"Headlock" will be Imogen Heap's new release on October 2nd with artwork by Ryan Obermeyer. The radio edit will be backed with "Mic Check" (a new vocal-only song) and the vide. There's also going to be one of those U-Myx thingys which enables you to mix your own version.

Ever wonder what happened to this band? Their last CD sucked, so it seems like I haven't heard them sing sinng sinnng since 2001.

Goldfrapp You can hear the fantastic Flaming Lips remix of "Satin Chic" - called Satin Boys Flaming Chic or something at Goldfrapp's myspace page. It's short, sweet and lush. Meanwhile the Homo is back with the MP3.

Jay Jay Johanson has already finished his new album The Long Term Physical Effects Are Not Yet Known and it's not a dance record.

Have you seen the Tori Amos boxset? It is quite deluxious. Tori turned 43 on Tuesday!

I will definitely be seeing The History Boys. This is the same cast that has been perfoming the play onstage. For those of you who know Alan Bennett's work, you should be sure to read his very short novella called The Clothes They Stood Up In - you can get in it on Amazon Marketplace for less than a dollar.

The new BWO video for "Will My Arms Be Strong Enough" is fucking mental.

yay! I am going to see the history boys british styl-ee on sept8th with my bon friend Kirsty.

Love the new BWO vid - although i am saving playing that track a lot til christmas. chariots of fire feels more now. Or something.

i will be buying la timberrod. i have no shame

You have got to be kidding me about the Depeche Mode hits set?!?!? Another one?

Meanwhile, someone somewhere said that PSBs PopArt is getting a U.S. release date in October....but I can't find any info on that.

One more thing: Oh, Jay-Jay.... the kids are gonna thrash you for not sticking to your original sound.

"Automatic Lover" was totally my jam for about 2 days back in summer '03. Good times...

Wow, that BWO vid IS mental! They've all been a bit strange or camp in one way or another, but this really takes the cake. And yet, I am still drawn to it for some reason. First CD was better for me, but I like Halcyon Days too--maybe too many ballads, but they make a nice double disc, and if they ever want to break anywhere but Sweden, they'll need that variety.

As for DM, if the new song is good, it seems like a nice encapsulated collection for those who just want a taste of the best DM and not a chronological overview of every single. Labels have to get creative in this competitive world (no pun intended) to sell product, even if that means offering it in many different forms (hence the "limited edition" phenomenon). Hope "Martyr" is excellent!

PSB ARE releasing Popart in the US (finally) on EMI in October according to my sales rep. Is it necessary? I would think most fans already have it, but maybe they want it out to coincide with the US tour. Just what FUNDAMENTAL needs is more competition from their older hits.

Wasn't going to buy the Tori box until I saw it...now I HAVE to have it! I didn't like the way songs were spread out & combined on CDs, but I guess there's enough new stuff and a great package to make it worthwhile, even tho I've spent hundreds of $$ collecting most of those B-sides for years.

This is getting long, but LOVE IHeap, Divine Comedy, and the frapp. JJJohansen...liked the last one, but it does seem so long ago. Hopefully Travis can recapture some interest. And the Kelis is great fun--pretty racy at times also. "Blindfold me" rocks!

Sad to hear Frank--it was good, but makes me wish Rachel had done better--she deserved more. If Paris Hilton can get the attention she gets (and lets not even mention that GHASTLY Brooke Hogan), Rachel should have gotten more of a shot.

By the way, my store sold more than twice the amount of Outkast this past week for Danity Kane, Diddy's goofy Pussycat Dolls/Making the Band3 girl group, while Kelis limped into the game. There is no real justice in popworld.

ooohh, that Divine Comedy b-side is good! And I still haven't heard the whole new album.