Review: Keane's Under The Iron Sea 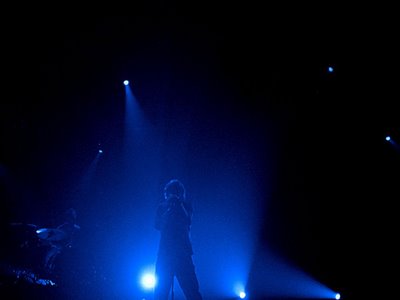 I so wanted Keane's new album Under The Iron Sea to elicit a big collective orgasm, but really it's just a pleasant sigh. There are indeed some very good songs added to the Keane canon. There's the angry "Leaving So Soon," with an operatic chorus [...and a lyric I dedicate to a complete dickhead in my real life!]. The catchy, but disillusioned "Crystal Ball" is exciting: a stadium armwaver for sure, with a really bad lyric on the chorus and a good one on the bridge. "The Frog Prince" has a sweet fable lyric and the put-a-spell-on-you bit is really beautiful.

Despite all this, the record is not really a transcendant masterpiece. Were my expectations too high? Sure! Did Coldplay live up to expectations after their first CD? Yes, they blew everyone out of the water! As did Travis with The Invisible Band. Take Keane's nice new ballad "Hamburg Song." Why give it such a lame title? Becuase they didn't know what the song was about? It could've been "The Rotterdam Song" if Beautiful South hadn't taken that.

The band have (annoyingly) made much of the fact they were unravelling under the pressures of touring and fame when they made the CD and, to me, you can hear it. "Atlantic" is just such effort to get through - I don't get it! Pretentious! The ecstacy so prominent on their debut is not here, so just go back to "Your Eyes Open." They do try some new sounds, especially on a slow-grower like "Broken Toy." It is to Keane's credit that this and a few other songs (especially the ballads) do not leap out immediately. You have to play them again and again, which has meant the album's come into focus for me after about a month of listening to it.

The identity crisis that "Is It Any Wonder" led me to anticipate is not so bad. That song is overrated, though it's probably strong live. It sounds like u2, which translates to me as a blatant bid for chart success (not even touching that shitty video).

I still say Under The Iron Sea is at its best with the cover art! I'd agree with Paul that UTIS is not as bad as it seemed at first. I don't know if this album will place in my Top 10 of the year... and that orgasm I mentioned up top? Are Keane lovers who don't try hard enough the second time...or am I just so angsty that I killed the moment?

A good blog called The Test Pilot has a post with some MP3s.
Posted by xolondon

wow, totally disagree with you about "Atlantic", thats the one song in the album that I truely adore...

I must disagree, as well, in that I think this album is -- not better than, but rather -- a step forward from Hopes And Fears. I find it to be melodically superior, as I think they're getting better with mastering hooks and catchy moments in the songs. My favorites are "Nothing In My Way," "Bad Dream" and "Crystal Ball."

I will agree that "Hamburg Song" falls pretty flat on these ears. They played that one when I saw them live last October here in L.A.

The wrote 'Hamburg Song' in a rehearsal studio in Hamburg, so I guess that is where they came up with the title.

I was turned off 'Atlantic' after seeing the video, but now it is a favourite along with 'Crystal Ball' and 'The Frog Prince', the album is great!

I just came in from seeing them live in a small club in Toronto and they put on a fantastic show. At the meet and greet afterwards they were given awards for platinum sales of 'Hopes And Fears' in Canada.

If I can get some of the video I shot transfered I'll put it up on my recently somewhat neglected blog.

whether it was the fact that i was listening to it in beautiful Barcelona or just that i am more forgiving now, but i do quite like the album after slating IIAW for months. Oops! You're right, its not a masterpiece but it does have some great songs and i seem to be in the minority about loving Hamburg song. But i do... i think this album will grow on me more over time. i look forward to seeing them live at V in august...

I actually like "Hamburg Song", I just find the title lacking!

I knew this review would be perceived as a slam, but it really isn't. I didn't mention some other songs I like (such as "Nothing..." which is the most like the debut), but I also didn't mention the song I will NEVER play again, "Put It Behind You."

i didn't think you were slamming it and i did say on my site i only liked it 71.2% as much as hopes and fears which is quite a big drop off. Love the IIAW b sides tho...

ok, i'm sooo late to the party here...when under the iron sea came out, i got it, listened once, and it went away. I didn't even care to comment, then I went back and now I can't stop listening, especially to crystal ball...i don't even dislike the lyrics in the chorus of it...i even kind of like them! i've been scrounging around on blogs today to see what everyone thought, and I had no idea the album was so divisive!! thanks for the post!