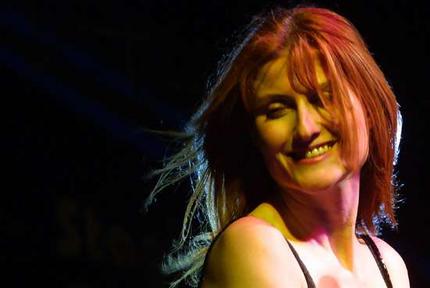 Do you know Eddi Reader? If you don't, you should because your life will be the better for it. Eddi (wiki here) is most known in America for one song, recorded in 1989 with Fairground Attraction, called Perfect - you know: I don't want half hearted love affairs. It's an 80's classic. Since then she has recorded 6 solo albums of original folk pop material and released an acclaimed album of Robert Burns songs. She's Scottish and spunky and red-haired. The music is many things - folk, pop, standards, etc. Her voice is crystalline, but it has an edge that slices through words in a very pleasing way. If you count yourself a fan of 1) songwriters, 2) women, or 3) humans, then there is no excuse not to listen to Eddi Reader...

What Eddi reminds me of...

Arthur's Seat in Edinburgh on a cold, sunny, windy March day, rainy beaches in Brighton, 1994 - when I lived alone, unrequited love, hearing voices through hotel walls and wondering who those people are, blue glass, a kite, a 50's photograph.

Her brother is a fucking amazing singer as well. You know him as Frank - or Francis - Reader, lead singer for Trashcan Sinatras.

Her current release is a double live CD called St. Clare's Night Out and her next album of original tunes is expected before the year's end.

Janet Jackson's current iTunes playlist includes Eddi's ballad Wings On My Heels, which the late Kevyn Aucoin introduced to her.

Saturday Night
Eddi's b-side cover of the Blue Nile classic is better than their version because it's stripped to voice and melody. This is one of my all-time favorite songs. BUY IT

Fragile Thing
Eddi's 1999 collaboration with Big Country (yes, them!). A perfect song made more moving by the fact that Stuart Adamson proved to be so fragile himself. A bit of a rarity, this one. I spend a lot of cold nights missing you... BUY IT

The Right Place
The first Eddi song to grab me, it's a bit of a manifesto. The lyrics are very strong and her vocals lift them higher: Five or ten lifetimes ago / There lived a girl that you don't know / She walked about and answered to my name..." I also love how she sings the word wind in the first verse, somewhere between the noun and the verb. Amazing middle eight... BUY IT

My Love Is Like A Red, Red Rose for all you folkies, on YouTube. She looks very Bonnie Raittish in this video.
Posted by xolondon

She did a cover of "Town Without Pity" that was Quite Good.

I love her stuff, thanks to you. :). Her cover of Ae Fond Kiss is one of my favs, because a celt band I listen to, the Battlefield Band used it in a song. But I adore her other stuff, too.

Once again, thank you for scanning the history of great pop for artists like Ms. Reader. I had the pleasure of having her perform at an instore at my suburban Philadelphia CD store 5 years ago (for Simple Soul), and she could not have been a sweeter, more gracious person. She performed for less than 20 people (for an hour), but sang like she was playing for a full house. She performed tender and beautiful versions of many of her classics (mostly solo songs), and I have the utmost respect for her as an artist, and not just a 90's Lilith-hanger-on (as she started before all that). Fans of good music should really check her out. Thanks so much for choosing another great artist to feature! (Sorry about the re-post)

i have to confess i got eddi reader confused with (don't know how) Voice of the Beehive rather than fairground attraction :O I don't even know how i made that connection. So not only did i check out some eddi tracks which are perfectly lovely, but got to remember my fave VOTB track - monsters and angels. cheers

Paul, at least you didn't get her confused with Eddie Vedder. Ba-da-boom - Tcccssshh!

But seriously, folks, I caught Fairground Attraction on an American airing of the '89 Brit Awards - when they one best single or something for "Perfect" - and that's when I really started to realize how vastly different the UK and U.S. pop music scenes differed.

I went out and bought the 45, though, the next week. Great to hear newer stuff by her.

God almighty... they WON, not ONE.

she does have a wonderful tone...i'm all about the tone. martha wainwright sounds like her after about 6 hundred packs of cigarettes and a few jugs of whiskey.

the hauntingly beautiful "Nobody Lives Without Love" (off the BATMAN FOREVER soundtrack) would have to be my pick for her best.