I'm living for the weekend, trolls! 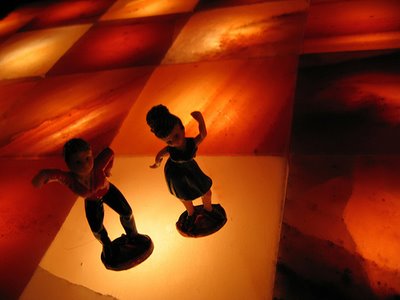 Do you like that picture of The Dancing Kids? I think they look like they are on the Madonna tour. If you want to see more, look at Krissy's cultish Dancing Kids pictures. Actually, the kids are here with me now in my office, but I don't have a camera. Will rectify that soon.

Xtuna has a new single out called "Ain't No Other Man" This jury's out on whether it's good or not, but it does sound different and for that I am thankful. Hear it at Popbytes.

Erlend Øye, late of Kings Of Convenience, has a new group called Whitest Boy Alive. Deets at Stereogum. Let me tell ya they are the Dullest Boys Alive. Erlend sounds great in a sqizzy electronic atmosphere on his solo CD and KoC's songs are positively gorgeous. This, however, sounds like unbaked demo tracks, bland and lifeless. There may be decent songs in there, but Øye surely has the money to record them properly. Boo hiss!

Mojave 3 have released the single of the year, according to Torr, and it's called "Breaking The Ice" Hear this jaunty track at Plague Of Angels. Gosh, dont' they sound Amurrrican now? I think it sounds like Neil Halstead is singing "breaking the eyes again"!

Keane's upcoming single "Crystal Ball" has some of the worst lyrics I have heard since... Coldplay! Take a gander at the chorus lines: "Oh crystal ball, crystal ball, save us all, tell me life is beautiful, mirror, mirror on the wall..." Jebus GAWD, that is shit!


Vaginal rejuvenation is all the rage in New York City. Here is the urogynics ad: If your vaginal laxity is severe, or your labia are assymetric or large or bothersome, you may benefit from miminally invasive scar free vaginal reconstructive surgery. I say what about the guys? Does one ball hang lower than the other? How about a ball-lift or dermabrasion of the scrotal sac? Electrolysis of the perineum? Who is doing that, hmmm? What about the dying or plucking grey pubic hairs? Hmmm? Equal rights for men damnit!

Which brings me to my feet. (heh heh, see what I did there?!) I have been using Lush's Pied de Pepper foot cream for like six months and I swear it really works. Product placement = lifetime supply? I put it on every morning and most nights. If you run into me on the street (in some of my bitchin' shoes) you can sniff and lick my feet and you will like it! You. will. like. it. gimp.

30 billion people watch the World Cup, or something like that. So I am thinking I should start writing a them for next year's Cup, don't you? That would surley mean I'd never have to work again. No wonder Embrace sold out.

Yes, I love the headline on the New York Daily News the other day, too, after New York's anti-terrorism funding was cut in half -- FEDS TO NEW YORK: DROP DEAD!

But hey, at least really important things like immigration and gay marriage are all of a sudden being used to clutter up the Senate floor, instead of dealing with the mass genocide in Darfur, catastrophic global warming or that crazy dude running North Korea that's just sitting back and waiting....waiting....waiting...

oh my, i read the Q magazine article and review on Keane who did come across as whiney, but it did make me understand and appreciate the single a little more...i still wouldn't mind the piano players fingers running across my keyboard.

hey, now you are finally living for the weekend, are you also working for the cash machine or are you tied up too tight?

Paul, I don't want to cause unnecessary trouble by divulging my cash situation, so I think it's time we move on now. ;\

I read that Keane piece and still dislike that song. The bsides are better than the single.

I liked the 2nd and 3rd Radiohead CDs and then hated them once they became an art band.

D'luv, what can you say? Frist was on TV saying that the most pressing issues are gay marriage and immigration! WE know the truth that marriage has been damaged by Titney Spears.

Even K-Fed would make a better Senate majority leader than Bill Frist. Or Britney...

"And so, if the government could just get in the kitchen and rearrange a few things, we could certainly party with the Hat-i-ans."

Anyway, The Village Idiot's backing the marriage bill, so we're back to distracting from everything else. That's so 2004.

I love the dancing kids, y'all. They are cute.

Sorry, no deeper thoughts about gay marriage or anything. I probably have them, but they're not coming to mind right now.

I also don't really have an opinion on Radiohead because I don't have any of them. The only song I have of theirs is from the L'auberge espagnole soundtrack

Props also for the Clueless line, a movie I still love.

I cannot believe no one commented on the assymetric, bothersome labia bit!