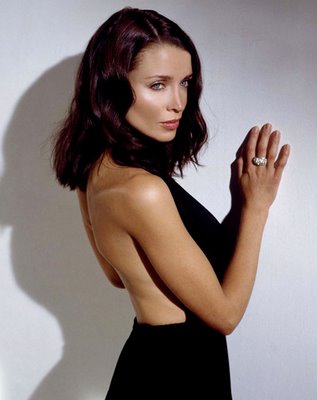 Dannii Minogue - or is that Daaannnii? - releases her Hits And Beyond CD on Monday. What I want to say about this event:

1) Dannii is not sister Kylie, but she is a good surrogate for Kylie when K's on sabbatical. Her voice is virtually the same, just not as good. Her songs are virtually the same, just not as good.
2) Why would anyone want to buy a full Dannii CD? This record pulls together the best stuff. I loves me some "You Won't Forget About Me." Love it. Got that? Love. It.
3) I am drunk on white wine sangria as I type this, so Dannii is lookin' mighty good.
4) Hear one minute samples of all the songs. Of the new tracks, other than the excellent single, "Love Fight" and "Good Times" seem best.
5) Dannii once had Nip/Tuck's Julian McMahon's dick inside of her. She was married to him, in fact.
6) Dannii is Australian but she spends mucho time in England and England is kicking ass and balls at World Cup.
7) They should have included the Madonna-esque "On The Loop" in my studied opinion. D'ya know it?

"Love Fight" (new track, lots of web chatter about this)
"Who Do You Love Now" (MP3 - stellar dance collab with Riva. A+)
"So Under Pressure" (better-than-the-video TV performance on YouTube)
Posted by xolondon

Hey, we had parallel Saturday nights! Shaz and I barbeckequkued (I spelled that right, right?) last night and had a bottle of vino, then came in and ate at listened to Neon Nights, "Perfection" and "So Under Pressure" on the iPod.

Now, here's what I want to say on your points above:

1.) a. - Dannii is indeed not Kylie, but last night Shaz pointed out that she probably goes in to see her plastic surgeon and says, "Make me look like Kylie!" For a gal that's had some work done, it's really good, as opposed to someone like Teri Hatcher, where here face looks like a skull with a shamois cloth stretched over it.

1) b. - I'm going to argue with you on your point of D's songs being virtually the same just not as good (again, this just hit me last night). They are the same in that they're in the pop/dance genre, but I've come to find that Dannii has her own distinct sound, called "High Class Call Girl Pop." Look at every album sleeve and single cover over the past 7 years. She's basically playing the character of an upscale hooker, luring the record-buying consumer to come sample her wares. The distinction is that Kylie is more "Sexy Tease Pop." She's too classy to go the Call Girl route. She just teases the buyer. Dannii will actually sell it to you. As for her songs, I'd argue that they're not as big of hits as Kylie's, so they're not in the general consciousness as much... but they're good! For instance, "Better The Devil You Know" is a classic... no arguing that. But "Who Do You Love Now" or "All I Wanna Do" are great songs, too -- not better, but still great -- the stars just didn't align correctly to make them classic anthems.

7). "On The Loop" is probably my favorite song off Neon Nights! But, there's that hidden remixed track at the end of the album called "Come And Get It" -- have you heard the single version of it that was only released in France a few years back? It's totally her best song ever! Lemme know...


Anyway, hope you woke up headache-free! I love that you had a Dannii-ish Saturday, too! I'm really loving the extended mix of her new single. And yes, I'm up early again. Always am.

YES re Dannii's look. Talk about someone whose face has changed!

I defer to you on Dannii as my knowledge is limited. I don't even know all of "Neon Nights." I do think Dannii is probably more club than her sister - a lot of her songs have the club anthem / gay disco sound, whereas Kylie's strip that out for a more pop-art approach.

Funny you should mention the extended mix. I sent it to my friend (in LA!) PrincessYumYum just this week.

I get up early too - 8am is late for me, though I have been known to go back to sleep, though once I do that, I can't wake up! I become sort of paralyzed.

Neon Nights was a fantastic CD, beginning to end. I actually found myself going back to it more often than Kylie's Body Language. As for the previous comments, 'tis true about the call girl pop...how many gals can sing a song like "Vibe On" and sell it so it doesn't fall flat on its face? She always seems to steer clear of total sleaze...a good thing. Wish we were getting an entire new album, as I tend to prefer her newer songs, but I guess the company may be a little jittery after the recent non-album singles underperformed a bit. Hopefully this will hold me until Kylie's comeback.