Musings: I've heard it all before 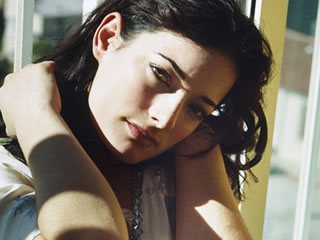 Am obsessed with Swoony Foxtress / Wet Nurse Laura Michelle Nigella Lawson Kelly. That's her above. As I walked to work today in the rain, with my giant umbrella, I had LNK warbling a grand tune in my ears. I'm sure I looked forlorn, yet sultry, especially with that 70-piece orchestra packing in behind me on the metro. The link above has the full-length, Sofia Coppola-esque video.

Tom Cruise's movie, That Which Should Not Be Named, underperformed! Take that, you thetan bitch! You're glib, Tom, you're glib...

Only the heartiest bloggers survive. Have you noticed how many blogs started up awhile back and just sputtered out? It requires some commitment - there are many better things to do than blog, I just don't do them! :) Like... nature? What is that all about?

I don't care about Snowplay - I mean Snow Patrol. I. just. don't. care. They sound like Gin Blossoms. 2 tracks are worthy: "Chasing Cars" and the song with Martha Wainwright. [I wrote this post before Lord Paul De Zappin' said nice things about it]

Katharine McPhee's version of KT Tunstall's "Black Horse and Cherry Tree" on AI last week was phenomenal. Will she top it? That lounge-lizard freak Taylor cannot win. Regardless, KT will make mucho dinero off that little advertisement.

I forgot to post Grant McLennan songs, but Stereogum has them. In particular a classic Go-Betweens song "Streets of Your Town." Lets Kiss And Make Up also has a big post on Grant.

Helen Reddy has taken over iTunes! I was agreeing with someone recently that "Delta Dawn" would be a PERFECT song for Arctic Monkeys to cover. If you don't know Helen, her song "Angie Baby" is one of the shadiest, most disturbing songs of the 1970's. It used to scare me! I mean, a #1 hit about molestation? It's a great song though...

Rolling Stone makes a case for Dubya as the Worst President in History. Boy howdy! I believe that years from now Hurricane Katrina will be viewed as the moment America woke up to his bullshit.

A glowing review of the new Divine Comedy CD is up now at Obscure Sound.

Looking At Them has some Imogen Heap tracks up, including some rarer ones. Very good blog - it has some cool mix tapes, which is the new rage on blogs.
Posted by xolondon

I can't stop playing Mary Poppins new album. As soon as i figure out You Tube i will post a clip of her doing Supercalifragilisticexpialidocious :) Marvelous! The dance routine is better than steps 'summer of love'...

Its ok that you don't like the new snow patrol cd. I'm as easy to please musically as i am in the bedroom and lets just leave it at that. Am pleased to have been upgraded to (gay)Lord status though. Kneel before me!

i have to disagree with you about snow patrol--i love them! i love reindeer section more.

when did they do a song with martha wainwright?? do they have a new album out or something?? you know i love me some martha, which is THANKS TO YOU! she is still in my top 10 faves and her album is also in my top 20.

Paul: Bow down before the one you serve. You’re going to get what you deserve. Head like a hole. Pink as your soul. (is that it)

Cunty: They have a new CD out tomorrow! It is like American rock music, be warned. Yes, a duet with MW called "Set The Fire To The Third Bar" - it's worthy, like the tunes that made then famous.

i'm not sure what thats from off the top of me noggin, but i kinda like it. Busty mary poppins clip from LMK now on my site ;)

Paul, that was Nine Inch Nails quote with the color changed...