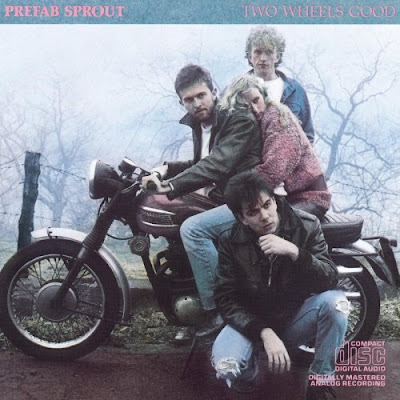 As I prepare for my... sixth?... trip to England next week, I've gone back into my blog drafts - there are over 450 unpublished posts! - to find one I wrote in 2006 and never published. For a long time I wanted nothing personal on this blog, but as time marches on, I just don't care. Another blogger encouraged me to post about some of my favorite albums, so with my impending return to the "motherland," I've chosen a perfect record of the 1980's: Prefab Sprout's Two Wheels Good.

As is often the case for music lovers, my attraction to this album is intrinsically tied to a period in my life. I was in my first year of college, in Fredericksburg, Virginia - The Town That Fun Forgot - and, by chance, met an older female student who I believe I was fated to meet. My self-image changed in the course of a matter of weeks - not everything, just certain pieces that came into clearer focus. An older student, she seemed so mature and wise, when she was actually just 23 at the time. She lived off campus in an actual apartment, which I didn't even know was MY dream until I saw her place.

People around me know I am a big proponent of the concept of mentors. Looking back on this relationship, I can see that's what was happening. I'm fortunate that people I've chosen to really listen to were wise.... and I've been protected in that way. But I was also open to it: there is an energy that flows in some relationships and it requires both people to be on a certain frequency. You know it when it happens - it's strikingly clear. These friends make you feel like a better version of yourself. 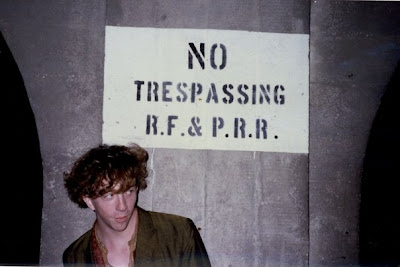 Two Wheels Good, known as Steve McQueen in the UK, is one of the definitive and most literate pop albums of the 1980's, along with records by Lloyd Cole and Kate Bush, among others. Produced by the esteemed Thomas Dolby, each song is a gem... so much so that I'm not sure I can describe my feeling for them.

The opener, Faron is a trucker's midnight fix, bouncing along, keeping him awake. Appetite is impossibly smooth and sexy, with a great refrain: "I think I'll call you appetite." When Love Breaks Down, the one you are most likely to have heard in an elevator, is classic breakup mode: "When love breaks down / the things you do / can't stop the truth from hurting you.. / When love breaks down / you join the wrecks / who leave their hearts for easy sex."

A few years after discovering this album, in 1991, when my friend had long since left Fredericksburg, I moved into an apartment off campus and I often thought of her when I'd walk home from class, going past her old building. Bonny is one of the most wistful, elegiac songs of the 80's - and so distinctly English. It seems silly now, but I remember thinking of my friend when I'd hear the line "Bonny don't live at home" as I walked past her place. I love Paddy's deep backing vocals at the very end, and I remember another good friend talking about how the easiest, best job would be being Wendy, Prefab's female backing vocalist, who had very little do except trill along with Paddy like a little bird.


The lyrics throughout the album are intelligent, wry and openhearted. I remember relating so much to the lines below, from Moving The River:

You must know me
Father, it's your son
And I know that you are proud
Of everything I've done

No, I wasn't a baby genius, but I am an only child and have often lived for my parents as much as myself, so that's how I absorbed that lyric.

I think most true music lovers have stories like this, of a time and place that are bound up in one particular album - I know they do. I have many stories, but this one is special because Two Wheels Good is the soundtrack to such an important stage in my life. Although that friendship proved to be sort of temporal, it too exists inside me every time I hear Paddy McAloon's warm voice. 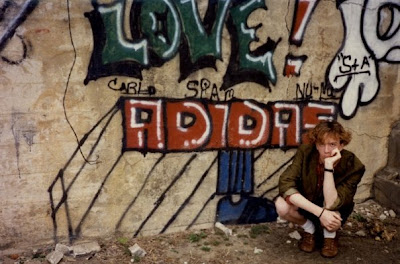 I've decided to post a few pictures taken during the weeks I describe above - and I should add that despite the friend/mentor described above swanning out of my life in the most baffling way, my best friends of that era are still my best friends today. Bless them each. You can buy this album for a song on Amazon Marketplace and it is available on iTunes as well.
Posted by xolondon

I love this post, and not simply because you look like a fetching versh of young Michael Stipe here.

I too had a "mentor" type in my life when I was 19 and he was 29. He was working at the college radio station and I was in a band, and he helped us by doing some early production work. When he got older, got a job, and moved away to the big city (that's your own KANSAS CITY), he got a job working in media for a large company that makes greeting cards (ahem). I would often think of him, and after a few years, actually called him up. We formed an even stronger friendship the second time around, and he actually invited me to come to a state of the art music studio to observe and see how it's done. We would go to indie movies and listen to lots of music together, and I was there as he went through a divorce and met his future wife. He even came to visit me once on the east coast about 10 years ago, and we went to NYC together for a few days to "get cultured".

Eventually we sorta drifted apart, more likely because of me, as our lives began new tracks (he had kids and became very Born-again Christian, I didn't), but there are times when I still think about him fondly, and I know one day we will speak again. This may have even lit the fire. I think I'll go listen to Prefab Sprout now. What meaningful times that era produced.

Keep up the personal posts. Can't wait to see some of the other 450!

I want to add my voice to countpopula's in saying that I love the personal posts. Anyone can post reviews of albums - and the blogosphere is littered with them - but it's how the music affected us and shaped us into the people we've become that's truly interesting.

You've inspired me to relisten to this album. I love the song "When Love Breaks Down."

To say this album shaped influence me as well would be an understatement. For me returning to Steve McQueen every few months is like slipping into a warm bath. I listen to a lot of house and disco and this restores my faith in great songwriting and storytelling. Thanks for sharing your story too. That last pic is very cool.

Anyway, I love reading personal stories too - I just thought I'd echo that one!

Great post! "Steve McQueen" was such an important part of my life in the mid-Eighties. I completely relate to how certain songs from the album irrevocably link themselves to moments in your life.

While you're over here in the UK, you might want to search out the 2007 reissue of "Steve McQueen", which Thomas Dolby himself remastered. It comes with a terrific essay on the background of the album, plus a second CD of Paddy McAloon playing acoustic versions of 8 of the tracks. Well worth the upgrade.

you went to MWC?? I went to MWC! i almost choked when i saw that pic of you because i have one of myself under the same bridge. downtown train tracks right? have you been back recently? it has been overcome with commercialism, which is so sad because the quaint history of the town was all it had going for it. i agree...not much fun, but i'm sure like me you frequented merrimans! (gone now) i lived in what will probably go down as my favorite apartment right on caroline st.

I too was deeply affected by this album. I was a Freshman at the University of Wisconsin-Madison when I first heard this is 1985. Paddy and the group have made some unbelievable music over time, but TWG/SM remain their seminal moment for me. Paddy is still releasing music, albeit without Martin and Wendy. Last year Sony released the long-shelved follow-up to Jordan, Lets' Change The World With Music- essentially a cleaned up version of the original demos. You can read/hear more about LCTWWM and Prefab Sprout at the vibrant website Sproutnet. http://www.prefabsprout.net/

Check it out, it's worth any old or new PS fan's time. Great blog XO!

Thanks for all these comments. I did not mention the remaster in my post, but it is SUPERB. Though it has little in the way of bonus tracks from the era, it does have the amazing new acoustic versions. On most collections that would mean meh arrangements sung by a potentially weaker voice. Not so here. In fact, Desire As is superior to the recorded version. I think my only complaint with the remasters is that I prefer the American mix of When Love Breaks Down.

McLean, is that your real name? Do I actually know you? I go way back though - between 1987 and 1992. I actually did not go to Merriman's much b/c it opened around the time i departed. I love FredVegas and my "town that fun forgot" comment does not reflect how I really feel about that place. I had an apt on Kenmore Ave across from the little fields there (cross st Monument). I DO go back because my cousin and godson now go there! Have to go to Carl's, though my beloved Sammy T's has gone downhill.

You know this already, but I was working in the band's record company offices on work experience (like an intern) when they got word from Steve McQueen's estate that the album couldn't be named after the actor... They didn't even have the Two Wheels Good change of name at the time.

One of my favourite albums