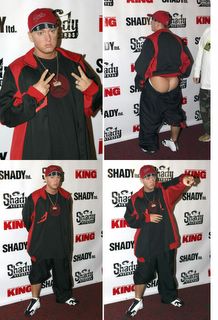 Okay, there is a lot of speculation about these Eminem pics. Roommate and I saw his freaky wedding photo in a mag and thought, WTF? We assumed it has been seriously retouched. He looks like he's transitioning female to male in the pics. Now we have these recent shots above (click to enlarge)!

A few thoughts:
1) His face looks puffy.
2) He seems botoxed free of expression. Sort of like a wax figure of himself.
3) His lips look a little bit plump...like they are fixed in a permanent pout.
4) Why is he showing his ass in public? Does he want someone to bump up against it?
5) Has he had his ass redone too? You have to wonder. They do have ass implants, right?

I think he is soon to become the new Axl Rose. We already know he has Howard Hughes tendencies to hide out in Detroit. Too much money and too much fame have dislodged a messed-up psyche. So be it I say, for the shitty karma he has puked into our culture. I would love to see him become the very monsters he skewers in videos.
Posted by xolondon