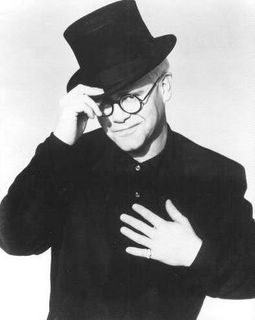 CNN has a brief interview with Elton John where he talks about his upcoming (2007) sequel to Captain Fantastic and also about his famous record shopping sprees to get the latest music. Elton is largely responsible for the career of John Mayer and he championed Ryan Adams in 2001 (we'll ignore his stupid patronization of Eminem and Pete Doherty).

The Wyckoff Correspondent and I need to join Elton for CDs and coffee in Hotlanta, doncha think? I wonder if Elton justs enjoys being around normal people who like music?

CNN: Is it true you buy the new album releases every week at Tower Records when you are home in Atlanta?

JOHN: I go in there at 9:30 on Tuesday morning, before it opens, before they put the f***ing things (out where) I can't find them. They're all on the cart, and I can go through them, one by one, because I know what I want. It's one of my things I look forward to every week. Those guys open up and (have) a cup of coffee there now, and it's just brilliant.
Posted by xolondon