That's a picture from Madonna's bitchin' performance of Nobody Knows Me on her Re-invention Tour. This was the second song performed in the show - one I had never liked until that night. Madonna performed it alone on stage on a conveyor belt and it rocked. She can hold an audience just moving around like a robot. Now you can watch a bit of this performance (7 MB Windows Media file) on this website: MadonnaTV. And no, the whole show was not vocodered or lip synced, though I suspect this bit was lip synced. 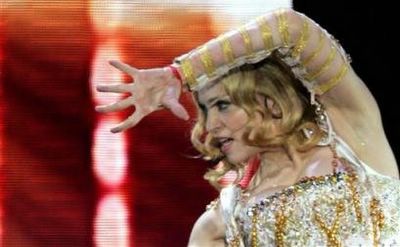 This is a teaser for her upcoming DVD documentary (no theaters?) called I'm Going To Tell You A Secret. I already know the secret: buy some $10 kabbalah water and a $25 red string and your life will be perfect too.

It's no good when you're misunderstood -
But why should I care
What the world thinks of me?
Won't let a stranger
Give me a social disease.
Posted by xolondon

So I've read that she is testing out her new songs buy playing at some European clubs sans vocals to see the reaction with the club-goers.
Supposedly, they are taping the reactions for later study to see if they are worthy of release (?).

The coproducer took some of the instrumentals into clubs while they were working on them. It was in Rolling Stone and now the story has turned into focus groups, etc. It's just Madonna hatas!

Small Business Printers said...
This comment has been removed by a blog administrator.
August 29, 2005 8:50 PM