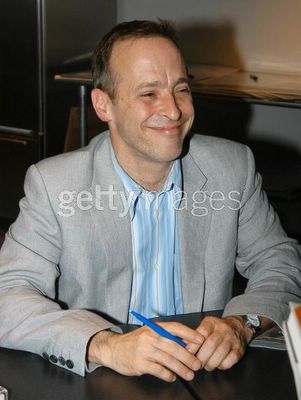 That's what I learned last night when I went to see David Sedaris speak! He read for about 70 minutes from several unreleased stories, some in-process. He was excellent and he made me happy. Among the jewels we have to look forward to in print are some great fables, in which he basically creates a scene of two people hanging out and chatting, but turns the people into animals like chickens and plays subtly on their own attributes. It was fokking genius. You say to yourself, "That seems like such a good idea - why didn't I think of that and why can't I do it too?"

He also seems to be incorporating his boyfriend Hugh (and Hugh's mother, "Ma Hamrick") into his stories more. There was a great one in which he described how Ma Hamrick comes to visit and wants to always help out around the house, so David has her do everything, like move furniture. I hope that one comes out soon. Another one, about a trip to Australia, is to be published in the New Yorker's upcoming travel issue, so keep your eyes peeled.

Sad news: David pulled out of the planned film of "Me Talk Pretty One Day" that was supposed to star Matthew Broderick. Pooh.

Here is David's Tour Schedule: go give him your money and he will give you a fun night. Notice that he does not have one night off between now and April 30. Here also is a link to a book he just put together of stories he likes by other writers.

PS: Illinois lost and I did not win my $10! Boo hooooooooo!
Posted by xolondon

So I ask myself.. who the hell is David Sedaris? Then looking around the room I see a book that I've already read.. "Barrel Fever." So that's him! :) I like Barrel Fever. And I'll try and check out some of his other stuff.

IS Barrel Fever the book with the hilarious story about "and then Charlton Heston left me out of jealousy after my affair with Mike Tyson" or something like that? That story is INSANE. Read "Me Talk Pretty One Day" and you will laugh out loud!